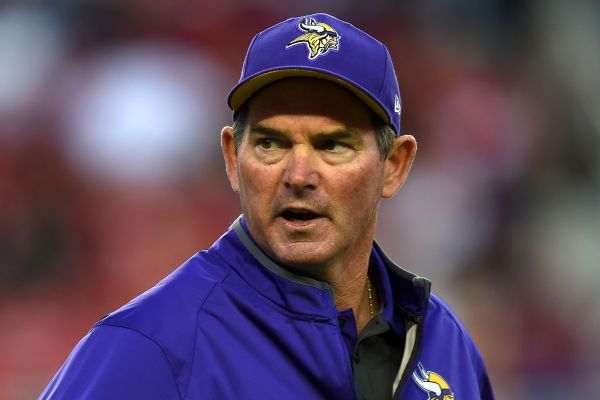 EDEN PRAIRIE, Minn. -- Two days after a deviation in the Minnesota Vikings' game plan for Green Bay Packers wide receiver Jordy Nelson irked Mike Zimmer enough for the coach to bring it up in his postgame news conference, the two players most centrally involved in the incident, and the coach himself, called it a simple miscommunication.

The Vikings had planned for cornerback Xavier Rhodes to shadow Nelson throughout Saturday's game, but the Vikings began the game with Rhodes staying at his normal right cornerback spot and Terence Newman on the left side, even when Nelson lined up on Newman's side of the field three times in the Packers' opening series. Nelson was in the slot for the Packers' next series and his 48-yard catch to start the third series, but Rhodes started shadowing him with 2:42 left in the first quarter.

After the game, when asked about Rhodes shadowing Nelson, Zimmer said, "That's what he was supposed to do the whole game. Someone decided they wouldn't do that." Rhodes said on Saturday that the Vikings' defensive backs decided during the week it would be better to play their normal sides against Nelson. Rhodes' postgame comments were recast on Monday, however, as a noble attempt to discuss the situation without implicating teammates.

Newman said Monday that what happened during the week was a result of miscommunication.

"We started one way [in practice,] there was a little gray area," he said. "We went to the game, played, got it corrected." Newman said he wasn't aware there was an issue until he got one question about it from a reporter on his way out of the Lambeau Field locker room.

When asked for further explanation on Monday, Rhodes called it "a little miscommunication for the first series," adding the Vikings handled it after that. Newman, who has played nine of his 14 NFL seasons for Zimmer in Dallas, Cincinnati and Minnesota, said, "There's no issue. We got it corrected after three plays. There's no issue. We're all on the same page. We're all still in this thing together. I promise you, there's no issue at all."

In his news conference Monday, Zimmer said, "We changed a couple calls later in the week. I probably wasn't specific enough in what I was asking them to do. And the one thing about it is, Xavier, Terence, these guys are as good a people as there is in the world. They're going to do their best every single time. They come out, they work every single day, they study, and they're really good kids. I could have been more specific."

Zimmer also said Monday that to his knowledge, the two cornerbacks did not intentionally play a defensive call differently than it was supposed to be played.

Asked why he thought Rhodes said the defensive backs decided during the week to change the plan, Zimmer said, "When I talked to him, I don't think he really felt like that's what he meant to say. Xavier's a great kid. Sometimes he gets nervous about things, and says them." When he was then asked if Rhodes said what he said out of a desire not to get others in trouble, Zimmer said, "Possibly."

Zimmer said on Saturday he realized what had happened when Newman came to him on the sideline. "In the first half, Terence Newman came over and said something to me like, 'I can cover this guy; let me have him,'" Zimmer said. "I said, 'Do what you're supposed to do.'"

When asked Monday why he was upset enough about the incident to bring it up in his postgame news conference, Zimmer said, "Well, typically, when we lose, and we don't play good on the back end [of the defense], I get upset. So there was a lot of things that I was upset about. I think when I said it, that was one of the things that came to my mind. I probably shouldn't be as honest after the games as I typically am. I'll learn my lesson."

When told of Zimmer's postgame comments on Monday, Newman replied, "I said, 'We can cover this guy.' I didn't ask to say, 'Hey, let me cover him the whole game.' I didn't say anything like that. I just said, 'We can cover him,' especially after the first series. They punted, so everybody should be kind of confident. That's all that transpired. There's nothing there."

Asked why Zimmer thought enough of it to bring it up on Saturday, Newman said, "I'm sure he's got a press conference and you can ask him. I'm not going to speak for him."

On Monday, Zimmer said, "I've had the guy for however many years. Terence and I have an unbelievable relationship. ... Terence would be the last guy in the world to ever be belligerent or go against anything that we'd do."

Nelson finished the game with seven catches for 145 yards and two touchdowns and had 136 of those yards in the first half.

Sources told ESPN's Adam Schefter on Sunday that Zimmer was expected to meet with Minnesota defensive backs coach Jerry Gray. The team still could determine that the players' actions were detrimental to the team and discipline them. The sources told Schefter, however, that players are still said to have a strong affinity for Zimmer.