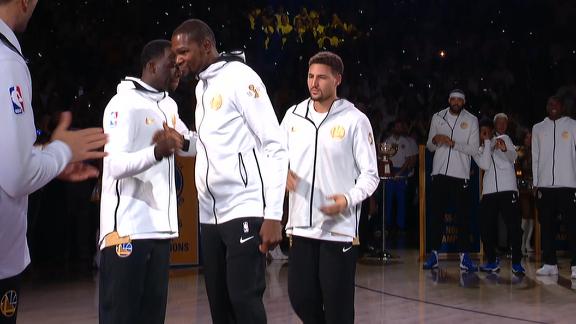 The NBA champion Golden State Warriors set another record before tipping off the season against the Houston Rockets on Tuesday night: They now own championship rings with the most diamonds.

The Warriors received their 2017 NBA championship rings during a pregame ceremony at Oracle Arena.The rings, designed and manufactured by Jason of Beverly Hills, are 11 carats in weight and feature more diamonds than any other championship ring across all four major sports (NFL, MLB, NBA and NHL).

The number of stones in the design has significant meaning. There are 36 princess blue sapphires to represent the number of Warriors' home wins last season, while the 31 white trapezoid diamonds represent the team's away wins. On top of the ring, there are 83 diamonds that represent the Warriors' total number of regular season and playoff wins combined.

On the sides, "4-0" appears three times and "4-1" appears once to represent the team's playoff-series records in 2017. In addition, the years "2016-2017" are listed around the ring along with each of the players' numbers. The Roman numerals "XVI-I" -- to represent Golden State's playoff record -- are also on the side of the ring. Each player has his last name on the ring as well. There are also five trophies on the side of the ring to represent each of the five NBA championships won by the franchise.

This is the fourth ring that Jason of Beverly Hills has made for the NBA champion in the past nine years.