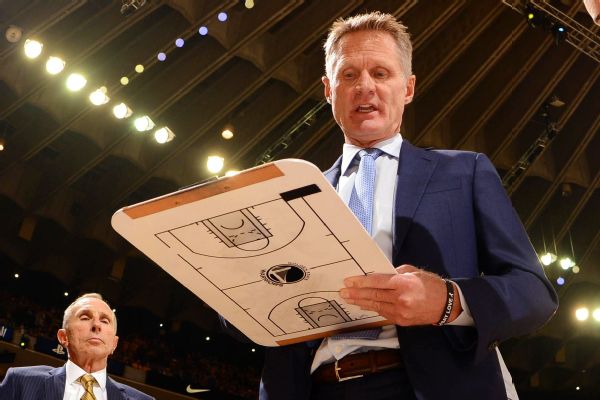 Golden State Warriors coach Steve Kerr will continue to have medical tests and procedures this week at Stanford. He remains out indefinitely.

Kerr has been sidelined by symptoms, including migraines and nausea, related to complications from the back surgery he had almost two years ago.

"I think the way we look at it is plan on him [Kerr] not coming back," Warriors forward Draymond Green told reporters. "That's the way we're approaching this thing ... Mike Brown is our coach, we have the rest of our staff, and that's who we're rolling with."

Kerr has had problems since the surgery, but he said that recently his symptoms became more intense.

"And whether that's this year or next year, then you know, we're ready. But we're gonna approach this entire thing as 'Steve isn't coming back.' And that's our approach for this entire playoffs until we hear otherwise."

Kerr said last week that he had been mostly OK for the past year and a half, "and suddenly things got a lot worse, and I don't know why."

In a news conference last week, Warriors general manager Bob Myers expressed optimism that Kerr would eventually return to the sideline and the condition would not force him to retire.

"Look, what he's facing is fixable," Myers said. "It's just finding the issue and solving it. So I think that's how you have to differentiate what he's going through with somebody else.

"Some things are not fixable in life. Some things that confront people don't have solutions. There is a solution here. We just need to discover it, and we will. I'm confident we will."