Which player had the best sneakers of Week 23 in the NBA? 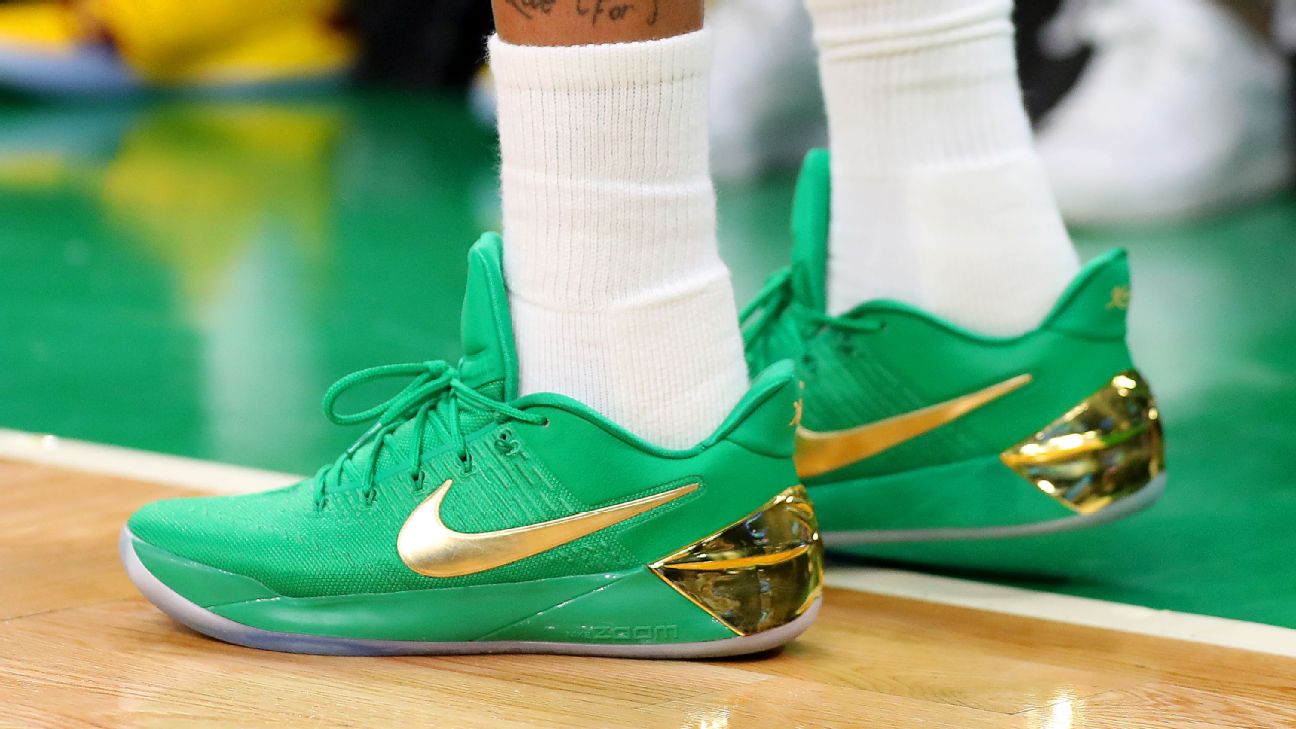 In a homecoming he had long been looking forward to, Denver Nuggets guard Isaiah Thomas had a surprise in store for his first game back in TD Garden to face the Boston Celtics. That message came via his sneakers, a special edition Nike Kobe AD, conveniently from three seasons ago.

"You know what's crazy? Those green and gold sneakers were for the Finals the last year I was here," Thomas revealed after the game. "I always kept those. I got a couple other pairs too, but those were made for the NBA Finals."

While "IT" donned the Kobe AD in custom colors throughout the 2016-17 season in which he was named an All-Star for the second straight time, the green and metallic gold pair was crafted by Nike for deep in the postseason, when the league only allows gleaming gold accents during the NBA Finals. With his late-game scoring barrages and stellar play during that stretch, Thomas, along with DeMar DeRozan and Devin Booker, was hand-picked to help carry the torch in headlining Kobe Bryant's sneaker line after his retirement.

Since the NBA threw out its colors rules this season, Thomas was able to work the sentimental pair into the regular-season schedule. As we've often seen some of the game's biggest stars do, he later signed and gave away the pair to a young fan wearing his No. 4 Celtics jersey.

On the opposite end of fan interactions, Portland Trail Blazers All-Star point guard Damian Lillard had his own fun with his latest Dame 5 sneaker theme, this time celebrating his early-season performance in Orlando while dealing with the constant wrath of a sideline heckler.

"The whole first half, there was this dude just constantly screaming my name," he said. "'You went to Weber State! You can't be that good!' Or 'Good shot!' if I missed. It just seemed like he was getting louder and louder."

After a slow start, Lillard was fed up with the nonstop attacks coming from courtside.

"I remember at the end of the first half, I pushed it up and I made a layup at the buzzer. After I laid it up, I was walking back to the locker and I looked at him. I was like, 'Just watch at the end of the game. I got something for you.'"

Lillard poured in 34 of his 41 points during the second half, glaring the heckler's way after made baskets down the stretch.

"After the game, I posted on Instagram," he said. "The caption was, 'Get dealt with.'"

The heel tabs of his latest Adidas signature edition read "Hecklers" along the left shoe and "Get Dealt With" along the right, with a collection of zippered-mouth emojis and those same words along the side panel. They're a fair warning for all future trash-talkers taking aim at Dame.

While in Atlanta, Houston Rockets power forward PJ Tucker was looking to show love to Hawks forward Vince Carter, having tracked down yet another vintage gem from almost two decades ago. All season long, Carter has been wearing retro versions of his classic Nike Shox BB4 sneaker, the shoe he made famous after the 2000 Olympics and his strong 2000-2001 season, when he averaged a career-best 27.6 points per game.

While Carter has been enjoying the luxury of Nike's many modernized BB4s in a variety of colorways, Tucker tracked down one of the rarest original editions made. With a red upper and silver panel, the pair was originally made for the 2001 All-Star Game. Only 500 pairs were released.

Unfortunately for Tucker, as he has experienced on a few occasions, the shoes completely fell apart before he headed out of the locker room for his pregame shootaround. He went with a similarly vintage pair of the Nike Zoom Flight 2K3 in white and red from 2003 as a backup, which held up just fine.

"MyPhoenixteammates used to wait for stuff to happen!" he said, with a laugh. "They used to bet if a pair was going to make it or not."

After the game, Carter signed each toe of the Shox BB4, making for a collectible Tucker will proudly display back home in Houston.

Elsewhere in the league, Australian native Ben Simmons continued his run of tributes to neighboring New Zealand in the wake of a tragic mass shooting, this time with an inscription for "Egg Boy." The nickname for 17-year-old Will Connolly immediately went viral after the teen threw an egg at Australian senator Fraser Anning, following his controversial comments after the shooting. Last week, the Philadelphia 76ers All-Star penned "Pray For NZ" along his Hyperdunks.

While he typically has debuted his newest Nike signature model during the playoffs, Golden State Warriors All-Star Kevin Durant took the court in his new KD 12 earlier this week, donning a neon and orange colorway inspired by his 1990s childhood. He is just the seventh NBA player to have a signature series extend to 12 consecutive models while playing, joining rare company in the sneaker game.

With March Madness on everyone's mind this week, 76ers small forward Jimmy Butler showed support for hisMarquette Golden Eagles. He strategically wore the colorful team exclusive of the Jordan Supreme Elevation inMilwaukee, complete with Marquette's unique block graphics along the midsole and hues of yellow and navy. Unfortunately for Butler, his fifth-seeded Golden Eagles were upset by Murray State in the opening round of the NCAA tournament.