Which player had the best sneakers of Week 8 in the NBA? 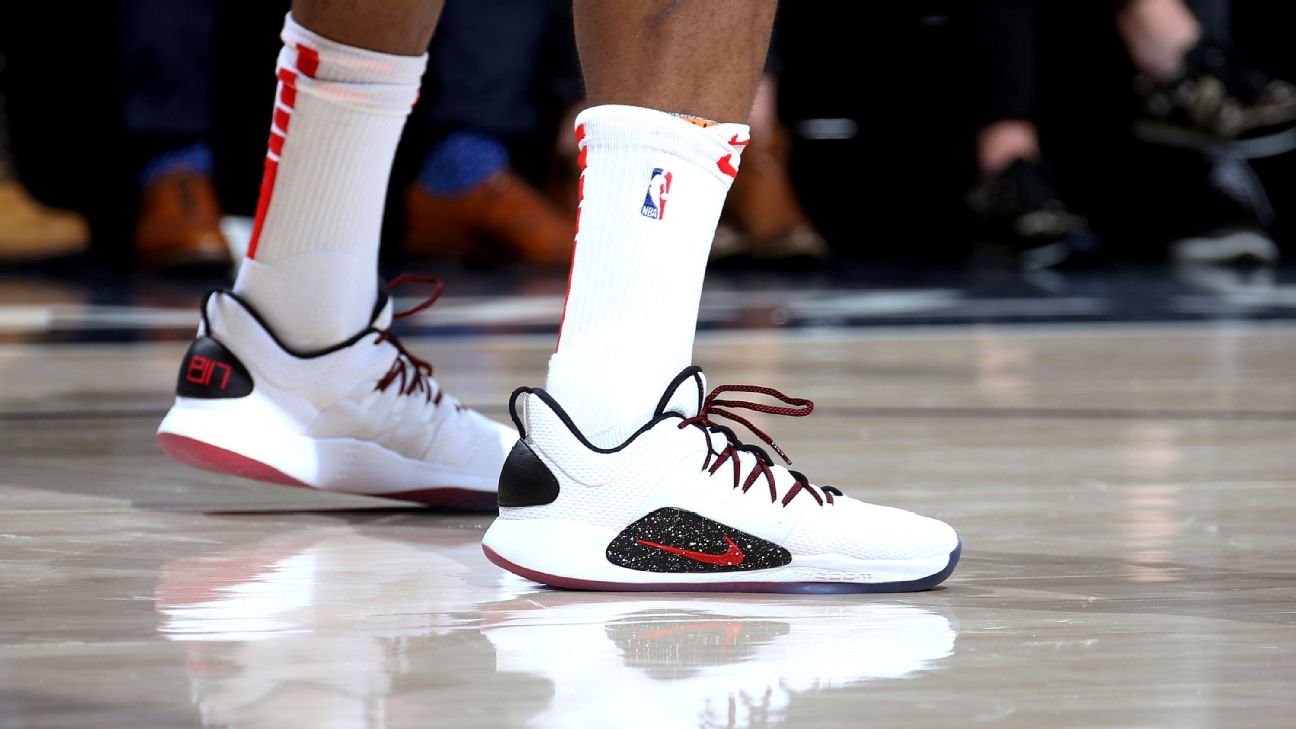 While he's become known through the years for wearing hard-to-track-down sneakers and rare editions from the signature lines of Kobe Bryant, LeBron James and Kevin Durant, Houston Rockets wing PJ Tucker felt like he had finally arrived this week, as Nike surprised him with his very own player-exclusive pair for the first time.

The 13-year pro, whose career began with a winding five-year path through Israel, Ukraine, Greece, Italy and Germany, has now established himself as an NBA veteran and one of the league's biggest sneakerheads.

The white, black and red player-exclusive pair of Nike's current Hyperdunk X Low is certainly more tame than most of the sneakers we're used to seeing from him, some of which are often worth well into the thousands of dollars. For Tucker, seeing his own custom "PJ17" logo icon along the heel counter and a colorway made exclusively for him in Rockets hues was surely more than priceless.

When Stephen Curry took the floor in Atlanta earlier in the week, he honored his father, Dell, with a new limited-edition version of his Curry 5 sneaker, knowing the elder Curry had flown in to watch the game.

The understated black canvas of his kicks featured massive, oversized lettering along the midsole in gold, spelling out "Bo Ya Nek." An uncommon phrase to any observer, it's actually an encouraging mantra to look ahead and power through, passed down through generations of the Curry family and first originating with Dell's dad, Stephen's grandpa Jack.

"I'm from kind of a rural area in Virginia, and my dad -- Wardell Jack Curry -- used to say that when things got tough, you've got to bow your neck. That means you have to get tough, get busy, that sort of thing," Dell told the Charlotte Observer. "I adopted that saying, and I would tell the kids that sometimes when things got tough."

Shortly after the Warriors lost the 2016 NBA Finals, Dell would often push his oldest son with the phrase throughout the summer, as Stephen worked all offseason to recapture his team's reign. Once the Golden State Warriors avenged their loss with yet another NBA championship in 2017, both Stephen and Dell got the phrase tattooed along their right forearm. Under Armour took note of the personal story and designed a limited-edition "Bo Ya Nek" version of Curry's latest signature sneaker to celebrate the theme, which was released earlier this week on UA.com.

As several brands from the 1980s and '90s enjoy a resurgence on the pro stage this season, Fila is also officially back on the NBA hardwood, signing Orlando Magic point guard D.J. Augustin to an endorsement deal.

"In a year that saw Grant Hill return to the Fila family and a year that finds many NBA stars fully embracing the opportunity to showcase their own individual footwear style on the court, we are excited to partner with DJ as he wears a new spin on classic Fila basketball silhouettes," said Jon Epstein, president of Fila North America.

The low-top pair worn by Augustin is a new hybrid design combining the Grant Hill 1 and the Spaghetti, the debut Fila signature sneakers of '90s stars Hill and Jerry Stackhouse. With the Hall of Famer Hill recently inking a lifetime deal with the brand, Fila will continue to look to sign additional NBA players who fit their approach and can provide on-court visibility for their retro and modernized sneakers.

"We're following our own playbook -- which means we're not going after numbers, we're going after people," continued Epstein. "Whether that is 15 guys in a season or zero guys in a season, when we find players who embody the values of persistence and personality that Fila athletes are known for, and those players are excited to embrace our brand, we will find a way to work with them."

Elsewhere in the league, Kyle Kuzma continued to make use of his unique partnership with sneaker reselling app GOAT, tracking down a pair of the instant classic "Grinch" Kobe 6s that the former Lakers legend first made famous on Christmas in 2010. Timberwolves point guard Jeff Teague also continued his own run of rare and random kicks, as he was spotted in a Zoom LeBron 2 from 2004, originally released during James' second season.

As one of the faces of the next generation of Adidas Basketball, it was only right that Hawks point guard Trae Young donned the brand's new N3XT L3V3L model, a fully laceless sneaker that features a hugging knit upper and support bar system to still lock you in. For Rashad Williams, the brand's senior director of basketball footwear, there was a "north star" approach to the design from the onset.

"How do you do something not only polarizing visually, but also polarizing functionally?" framed Williams. "We said, 'Let's build a rocket ship.'"