Will the real Rockets and Warriors reveal themselves in Game 7? 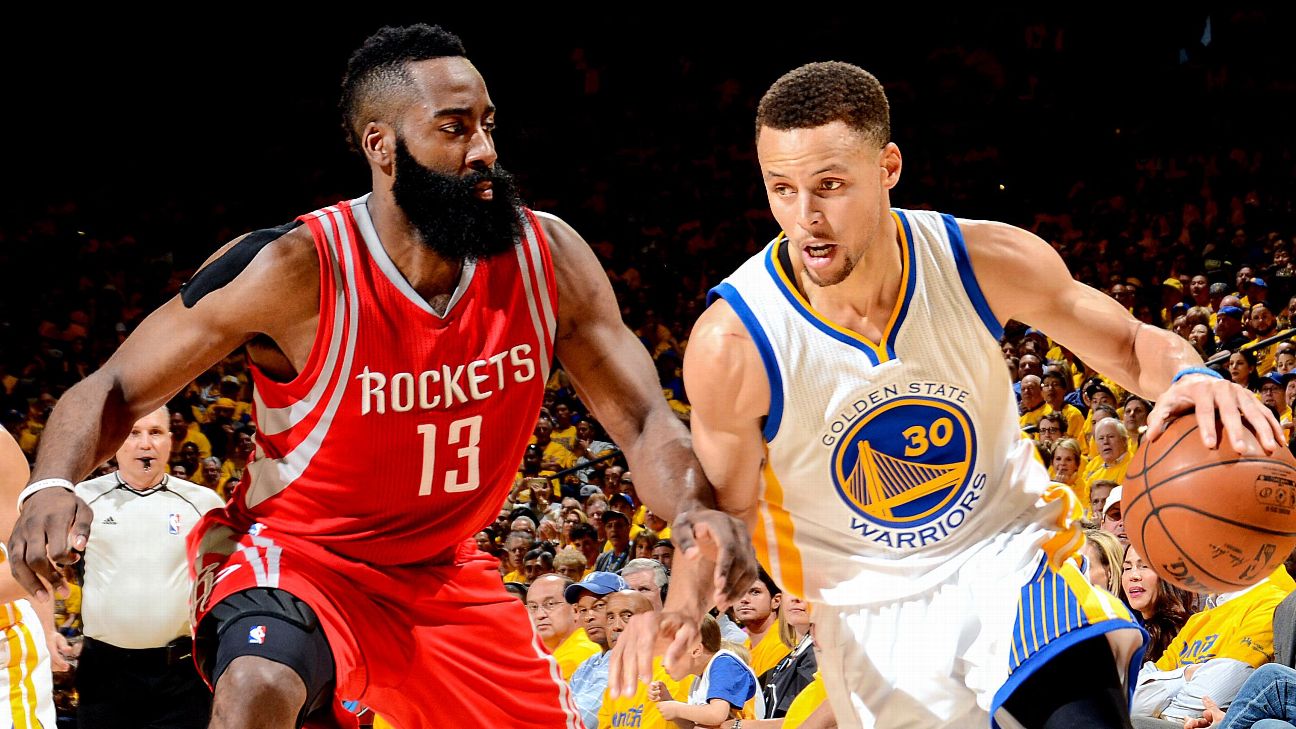 They huddled together in the hallway at Oracle Arena late Saturday night, seemingly calling a truce so both sides could have a nice holiday weekend.

Under other circumstances, Golden State Warriors coach Steve Kerr and Houston Rockets general manager Daryl Morey probably would be friends, drinking Modelos together after six games of a Western Conference finals as closely matched as this series has been.

Both are self-deprecating intellectual types who hate wearing ties almost as much as they love a good pop culture debate. But after what their respective teams have put each other through the past two weeks, the moment called for more commiseration than admiration.

"It's been a war," Kerr said as Morey nodded knowingly.

On this night it was Kerr doing the consoling as Morey processed the Game 6 loss and the prospect of a decisive Game 7 Monday night in Houston without future Hall of Fame point guard Chris Paul.

Morey's team had unraveled without Paul's leadership and playmaking ability in much the same way Golden State had lost a chunk of its identity in the first three games without Andre Iguodala, the Warriors' "adult in the room," as Kerr likes to call him.

After a season of pushing the sport to its theoretical zenith on both sides of the ball, the dream series basketball purists began referring to as the real NBA Finals has been rather disjointed.

Both teams have played stretches of beautiful, brilliant basketball but devolved into an ugly cacophony of one-on-one iso-ball that resembled a bad pickup game at Venice Beach. Both teams have pushed each other to their best and worst, exposing each other's individual and collective character.

Both have had to adapt after key injuries and strategical gambits forced them out of their comfort zones. And both seem downright exhausted, physically and mentally, as the series comes to a close.

It's hard to say what will remain of either team after the finale at the Toyota Center, or even whether the winner will be stronger for having survived. If anything, this series has seemed to confirm more of what we already knew about these two teams than it has revealed:

Golden State is the smartest kid in school who only responds when challenged; Houston was constructed specifically to match up with and defeat the Warriors, but sometimes lacks a reason for being beyond that.

Then again, maybe that's what Game 7 is for.

For the Rockets, it is about defining themselves beyond their Western Conference adversary. For the Warriors, it is about proving there's still joy to be found in what was once the NBA's coolest culture that has recently felt stale.

All season it felt as though the Warriors were playing out of obligation, rather than with the deep passion they had when this group first came together four years ago.

And all season, it has felt as though the members of the Rockets' core -- James Harden, Paul, Morey and coach Mike D'Antoni -- were pushing to prove they could collectively overcome their past failures. As D'Antoni told me before Game 1, "None of us have proven we can do it. Now we're all in this together."

That this opportunity comes against Kerr's team is a delicious irony for D'Antoni, considering their history. D'Antoni famously resigned as coach of the paradigm-shifting "Seven Seconds Or Less" Phoenix Sunsin 2008 after a series of fallouts with Kerr, the team's general manager.

The drama seems silly now: Kerr came into the coaches room after a game, offering suggestions that would have been better received the next day when emotions had settled. That eroded the trust between GM and coach, which made it harder to deal with philosophical disagreements (such as hiring a defensive-minded assistant coach like Tom Thibodeau or trading for Shaquille O'Neal), and downright toxic after yet another crushing playoff loss to the San Antonio Spurs.

Both have since acknowledged they made mistakes, with Kerr saying he should have waited with his postgame criticisms and D'Antoni admitting he had been too stubborn and focused on defending his style of pace-and-space.

This season, D'Antoni has proved he can adapt by embracing isolation-heavy sets around Harden and Paul and empowering associate head coach Jeff Bzdelik to turn Houston's defense into a gritty, switch-everything brigade led by the resilient PJ Tucker.

But D'Antoni still needs to prove he can lead a team across the finish line. And he might have to do it without one of the game's best leaders, Paul, who is likelya game-time decision for Game 7.

That's Harden's burden, too. He has shown plenty of individual brilliance this season -- he'll likely run away with the league's MVP award -- but he has fallen flat in the past when asked to carry a team by himself. That was the point of bringing Paul to Houston last summer. Now it could all be back on Harden's shoulders for one final, legacy-making game.

The Warriors, meanwhile, already have proved themselves on the game's biggest stage. Much of their run these past four years has been as the favorites, though. Very rarely, if ever, have they been pushed like Houston has pushed them in this series, certainly not since Kevin Durant joined the team two years ago.

"This is the worst situation we've been in since Kevin's been here and we're still two games from the NBA Finals," Kerr said after losing Game 5. "That's a pretty good worst situation. We're right there. We've found some things that worked for us. I'm extremely confident that we're going to take care of business."

There was a lightness in Kerr's voice as he expressed that confidence, as if he either knew something about his team the rest of us didn't, or had simply decided to loosen his grip on them as they faced their biggest challenge.

"One of my favorite sports stories is about Manny Ramirez," Kerr told me after Game 6. "They were down 3-1 to [the Cleveland Indians] and reporter says, 'How do you guys deal with the pressure?' Manny goes, 'There's no pressure. It's 3-1. If we lose, we all go on vacation next week. ... But if we win, that'd be great too.' I love baseball. But either way, life is good. Red Sox Nation went berserk. He doesn't care. He goes out and f---ing rakes. They win three in a row.

"It was a really sort of vision into an athlete's mind. The guys who do care too much tend to tense up. Grip the bat too tight. For me, early in my career, I tensed up and my shot didn't feel fluid. Finally I got to the point where I was like, 'F--- it. F---ing just let it go.' And I finally started making big shots."

If the Warriors are going to prove they still have it, the way forward is to let go and let it flow like they used to.