Oakland police call for community's involvement in preventing crime, but some have other ideas 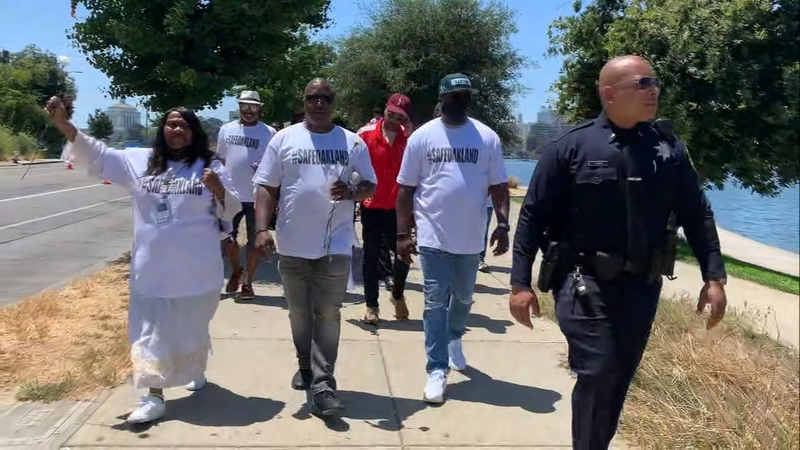 OPD calls for community help to prevent crime, but some disagree

OAKLAND, Calif. (KGO) -- In the East Bay, hundreds of people came out to "Stand Up for Safe Oakland." Oakland's police chief was remembering those lost to gun violence but called on the community to act as partners and get involved and report crime when they see it.

Earlier, the chief hosted this rally at Lake Merritt, calling for gun violence to stop.

Many neighbors have their own ideas about safety. One neighbor asked if the National Guard should be called in.

"That's too much, the community is my National Guard," said Armstrong.

The chief now calling on community neighbors to play a roll in preventing crime. This after Oakland has recorded 71 homicides this year. The city recovering from a chaotic Fourth of July Weekend with fatal shootings, Illegal fireworks and a sideshow involving 300 cars where a spectator was injured.

Oakland's top cop says Fourth of July in his city this year was among the most violent he's seen in more than 20 years on the force.

"The fact too many people are afraid to come outside like seniors, if you can't stand up for a safe Oakland, what can you stand for? We can't do this alone, it will take law enforcement and community together, this is that day," Armstrong added.

But how? Faith Leaders urge many not to stay silent.

But some neighbors say, crime is everyone's problem.

"This is out of hand because of people living out here, it's not the police's fault, get on the phone and call police so it doesn't happen," said neighbor Philip Johnson.

Police officials say the deadly weekend shooting at Oakland's Lake Merritt that killed a man and wounded seven others was not random, and is tied to San Francisco gangs.

About 200-300 people came out Saturday but not all liked the message.

Anti-police protesters showed up, and tried to disrupt the event.

Last month, the Oakland City Council voted to divert about $18 million from the Police department's budget.

"This is not about politics, it's about saving lives and healing a community," Armstrong said.

The chief says small community town halls will be held this summer around Oakland, talking safety and crime prevention.

The rally ended with the names of all 71 homicide victims being read out loud.