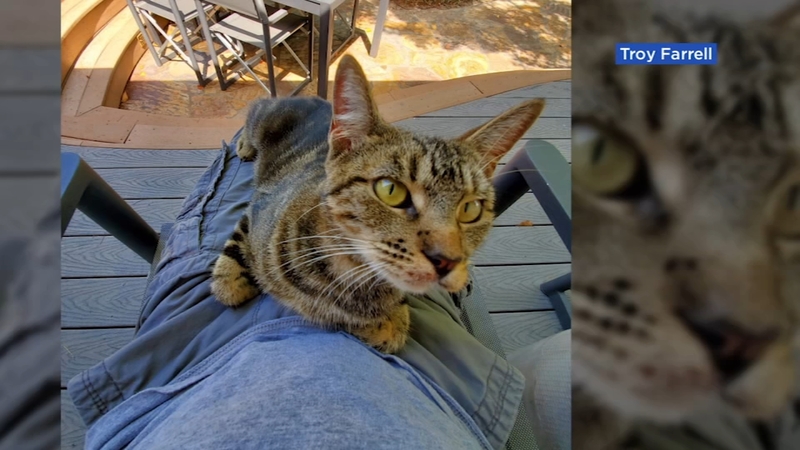 SONOMA, Calif. (KGO) -- For the past 3 months, Troy Farrell has been fighting to get his cat Nubbins back home.

"She was my support cat. That was my friend. That was who I have," said Troy Farrell, Sonoma County Resident.

RELATED: Tito, French bulldog robbed from owner at gunpoint in Castro Valley, is back home safe

Nubbins is a neighborhood cat, she's lived in Sonoma in the Railroad Avenue neighborhood for years. Troy says she is the reason they chose the house.

"Every time we would go to a window she would run up and be like 'I'm here let me in, let me in. I love you' and we said that's the sign. This is the right house,'" said Farrell.

Several years ago, Troy adopted her. In October, after he came back home from a trip she was gone.

"They stole my cat," said Farrell.

Neighbors say a couple staying at an Airbnb two houses down from Troy's asked about Nubbins while seeing her out in the neighborhood.

"They went to Terry's and Cathy's and said 'hey what do you know about this cat? We love this cat'," said Farrell.

According to Troy, he got a call last November from a vet in Long Beach confirming they had his cat but couldn't send it.

The vet at a VCA animal hospital had scanned Nubbins microchip.

RELATED: Man pays $1000 to get dog back after smash and grab in SF

In a statement, the Veterinary Centers of America says they have "legal obligations to the client who initially brought in the cat" and confirmed they are "fully cooperating with the Sonoma County Sheriff's investigation."

"It's my cat. She said, well we are not legally allowed to house cats in this facility. So, we have to give them back to the people who stole her," said Farrell about his conversations with the veterinary office.

Now the neighborhood has united to get Nubbins back by filing a report with the Sonoma County Sheriff's Office.

"Really ask our visitors, I hope you enjoy visiting Sonoma County. Please return the cat. We can probably find transportation back up to the state. This kitty cat is important to the family," said Susan Gorin, Sonoma County District 1 Supervisor.

Troy is hoping the couple who took Nubbins 500 miles from home brings her back.

"She means a lot to this neighborhood. A lot," said Farrell.

"Our top priority is the health and well-being of pets under our care. We also recognize and take seriously the role veterinary hospitals can play in helping reunite lost pets with their owners, while also balancing our obligations to respect the confidentiality of our clients. We have legal obligations to the client who initially brought in the cat, the person with whom a Veterinarian-Client-Patient Relationship was established - a relationship that is governed in California by the state Veterinary Medical Board. While we cannot discuss the details of this situation, we are fully cooperating with the Sonoma County Sherriff's investigation."
Report a correction or typo
Related topics:
sonomatheftcatsanimalinvestigationpolice
Copyright © 2022 KGO-TV. All Rights Reserved.
TOP STORIES
Owner of popular Oakland restaurant dies in shooting
ABC7's new 24/7 live stream offers local news, weather
2 killed after shooting, crash on EB I-580 in Oakland, CHP says
Dave Chappelle attacker now charged in December attempted murder case
Red Flag Warning prompts North Bay park closure
Newlyweds mark big day with fiery stunt
Kidnapped CA teen found in NY thanks to quick-thinking detective
Show More
What is monkeypox? What to know after US confirms 1st 2022 case
Expert weighs in on when you can buy a car amid chip shortage
Family learned of loved one's death watching Buffalo shooter's video
CDC director signs off on booster shots for children ages 5 to 11
EXCLUSIVE: SF firefighter charged in other firefighter's beating
More TOP STORIES News