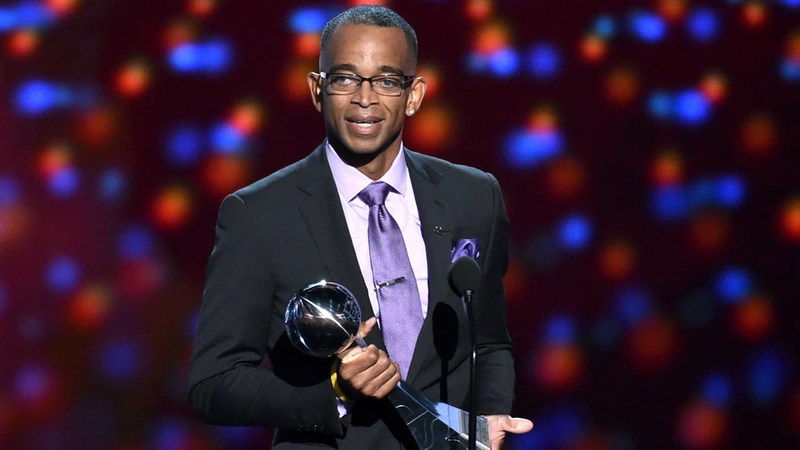 BRISTOL, Conn. (KGO) -- Stuart Scott, one of ESPN's signature SportsCenter anchors, died Sunday after a battle with cancer. He was 49.

"ESPN and everyone in the sports world have lost a true friend and a uniquely inspirational figure in Stuart Scott," said ESPN president John Skipper. "His energetic and unwavering devotion to his family and to his work while fighting the battle of his life left us in awe, and he leaves a void that can never be replaced."

After joining the network in 1993 for the launch of ESPN2, Scott became a leading voice on ESPN's SportsCenter.

Scott was one of ESPN's most recognizable and quotable personalities with famous catchphrases such as "Boo-ya" and "As cool as the other side of the pillow."

On July 16, 2014, Stuart Scott accepted the Jimmy V Perseverance Award at the ESPYs. During his speech, he expressed the following sentiment about his two daughters: "Taelor and Sydni, I love you guys more than I will ever be able to express. You two are my heartbeat. I am standing on this stage here tonight because of you." He also shared his approach to fighting cancer.

"I also realized something else recently," he said. "I said, I'm not losing. I'm still here. I'm fighting. I'm not losing. But I've got to amend that. When you die, that does not mean that you lose to cancer. You beat cancer by how you live, why you live, and the manner in which you live. So live. Live. Fight like hell."

On Sunday, President Barack Obama issued a statement about Scott's passing: I will miss Stuart Scott. Twenty years ago, Stu helped usher in a new way to talk about our favorite teams and the day's best plays. For much of those twenty years, public service and campaigns have kept me from my family - but wherever I went, I could flip on the TV and Stu and his colleagues on SportsCenter were there. Over the years, he entertained us, and in the end, he inspired us - with courage and love. Michelle and I offer our thoughts and prayers to his family, friends, and colleagues."

Scott is survived by his two daughters, 19-year-old Taelor and 15-year-old Sydni, his parents, and his three siblings.

ESPN says Scott's girlfriend, Kristin Spodobalski, was with him and cared for him every step of the way as he went through several surgeries, chemotherapy, radiation and clinical trials.