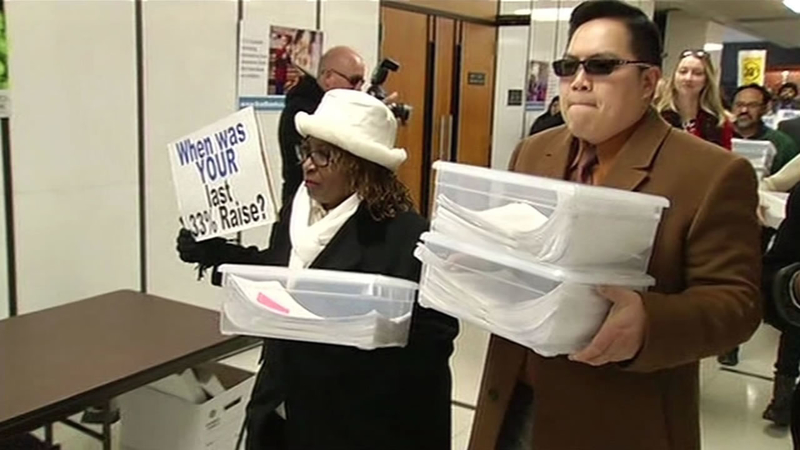 MARTINEZ, Calif. (KGO) -- There's a battle brewing in Contra Costa County over a 33 percent pay increase supervisors voted for themselves.

The raise was to go into effect on Monday, but now everything is on hold because opponents have collected tens of thousands of signatures.

"The most we got was 4 percent. They step to the front of the line and give themselves a 33 percent raise."

Armed with nearly 40,000 signatures, Contra Costa employees and union leaders stood in front of the county administration building and demanded supervisors rescind their own pay increase, their first in eight years.

"During those same years, we did not get raises either," said Peter Nguyen of Public Employees Union Local 1. "This was exactly period of time where this board demanded sacrifice from its employees."

In November, supervisors voted 4 to 1 to adjust their own annual pay to be more commensurate with other Bay Area counties.

The adjustment would increase Contra Costa's supervisor salaries to $129,000 per year, $32,000 more dollars more than a state assemblymember.

Supervisor Karen Mitchoff believes she and her colleagues deserve the increase.

"There's no concept of what this job entails," Mitchoff said. "The vitriol against the Board of Supervisors, that we don't do anything, we sit there. I actually had somebody write me and say well if you work more than 40 hours a week, it's only cause you're out cutting ribbons."

"We agree, SEIU 1021 agrees they should get a raise, but maybe four percent? I don't think any of us would be in this room right now if they gave themselves 4 percent," Sandra Wall of SEIU Local 1021.

The petition asks supervisors to rescind their own increase, or the issue could go to a special election that could cost the county more than $1 million.