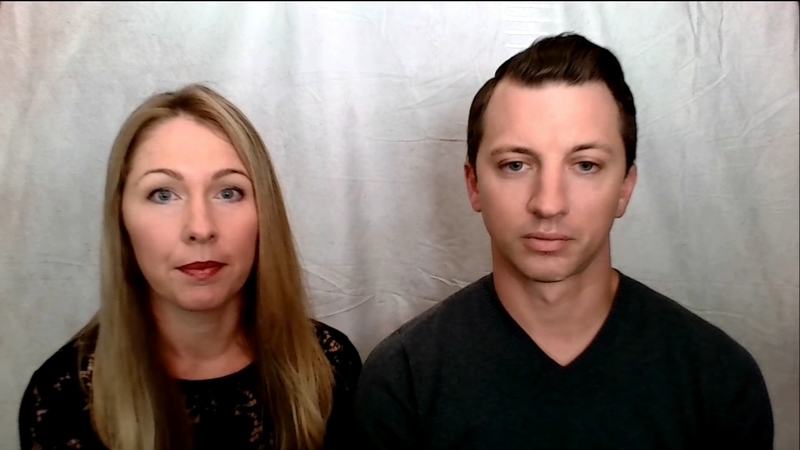 SAN FRANCISCO (KGO) -- The Vallejo couple police accused of making up their home invasion and kidnapping is responding tonight to an apology made by the department more than six years later.

With raw authenticity, Denise Huskins and Aaron Quinn are telling their story.

"For so many years we had to stand by silently as the whole world had misinformed conversations and judgments about the worst moment of our life and who we are as people," Huskins told ABC7 News I-Team reporter Melanie Woodrow.

In their book, "Victim F From Crime Victims to Suspects to Survivors" the couple details being victimized twice, first by Matthew Muller and then by the Vallejo Police Department and FBI.

In March of 2015, Muller wearing a full-body wetsuit, broke into Quinn's home where he drugged, blindfolded and tied up the couple, before kidnapping Huskins.

When Quinn turned to the Vallejo Police Department for help, Detective Mat Mustard interrogated him for hours, suggesting he had murdered Huskins.

A California couple at the center of the 2015 kidnapping known as the real-life "Gone Girl" is now speaking exclusively to ABC News.

"The frogmen obviously didn't do it, so who did it now, well it's the guy that I've been sitting here talking to tonight. So now I get out my puzzle pieces and I start figuring it out, okay, how do I make it, so you look like a monster," said Detective Mat Mustard in an interrogation video obtained by ABC News.

"When you watch that interrogation video now, what is that like for you, what do you think seeing that?" asked Woodrow.

Quinn submitted to a polygraph which an FBI agent told him he failed.

"You know where she is," said the FBI agent in interrogation video.

"I don't know where she is," said Quinn.

"I want you guys to find her. I don't know where she is," he continued.

"Unless you've been in that room you really can not understand what it's like," Quinn told Woodrow.

After terrorizing Huskins for two days at his home in South Lake Tahoe, Muller released her in Southern California near her parents' house.

That's when the Vallejo Police Department went from accusing Quinn of murder to accusing the couple of staging an elaborate hoax.

"It is Mr. Quinn and Ms. Huskins that owes this community an apology," said Vallejo police officials.

In June of 2015, Muller struck again, this time leaving his cell phone behind in a foiled Dublin home invasion.

It was former Dublin Police Detective Misty Carausu who alerted the FBI, Muller could be Huskins' kidnapper.

"There is a hero in this story and it is Misty. I think she needs to be commended for that," said Quinn.

Muller pleaded guilty to kidnapping Huskins and is serving a 40-year prison sentence. He's now also facing state charges, including rape, burglary and false imprisonment. The City of Vallejo settled a civil lawsuit with the couple for $2.5 million.

After more than six years, the city of Vallejo and the Vallejo Police Department apologized to the couple in an emailed statement to ABC7 News.

"The Huskins Quinn case was not publicly handled with the type of sensitivity a case of this nature should have been handled with, and for that, the City extends an apology to Ms. Huskins and Mr. Quinn. On July 20, 2015, letters from former Police Chief Andrew Bidou to Ms. Huskins and Mr. Quinn indicated that once an indictment against Matthew Muller was complete, the VPD would make a public apology to the victims. Based on the comments of Ms. Huskins, while the July 20, 2015 letter was a public document, it appears that the follow up personal public apology did not take place.

What happened to Ms. Huskins and Mr. Quinn is horrific and evil. As the new Chief of Police, I am committed to making sure survivors are given compassionate service with dignity and respect. Although I was not chief in 2015 when this incident occurred, I would like to extend my deepest apology to Ms. Huskins and Mr. Quinn for how they were treated during this ordeal."

Woodrow asked Huskins and Quinn for their reaction to the apology.

"They only apologized after major news outlets reached out and our book is being released," said Quinn.

"I think the thing that really matters most is action and showing not just us but the whole community of Vallejo that Vallejo Police Department is dedicated to making changes," said Huskins.

Huskins and Quinn are hopeful their story will resonate with anyone who has experienced trauma.

"I think that a lot of people can connect to different parts of what we went through," said Huskins.

They plan to share their strength with their daughter Olivia, on the other side as survivors.

"She allows you to see the world in a whole different way again," said Huskins.

The couple at the center of the 2015 kidnapping case the Vallejo Police Department called a hoax is speaking publicly for the first time in an exclusive ABC News interview.