Hundreds stranded after fire broke out underneath BART train 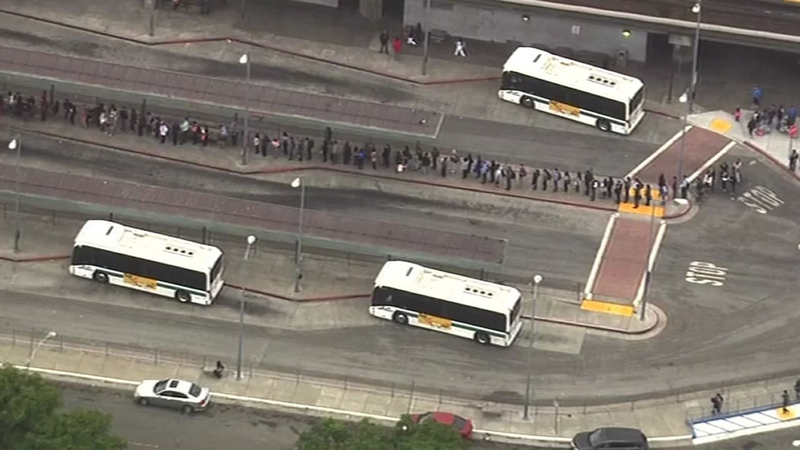 Hundreds stranded after fire broke out underneath BART train

OAKLAND, Calif. (KGO) -- Hundreds of BART commuters were stranded for hours after service was suspended at four East Bay stations following a fire that broke out beneath a car as it was leaving the Oakland Coliseum Station.

It's the latest in a string of breakdowns and problems plaguing a system in dire need of new tracks and repairs.

The interruption to service lasted for nearly three hours.

There were some minor injuries and BART blames passengers for not following emergency evacuation instructions.

The three passengers who were injured sustained cuts from broken glass and a back injury when they broke out two windows to escape the smoke they saw coming from underneath their car. It was the last of a three-car train going north as it left the Oakland Coliseum Station. The train operator had been instructing them to move to the car ahead of them. The track is about 60 feet above ground. "This is an aerial section of track that this occurred on, which means that people would be getting out onto a trackway with a thousand volts of electricity running through the third rail and then there's the potential to fall off of that section of trackway," BART spokesperson Jim Allison said.

3 Bart passengers knocked out window and escaped as train car filled with smoke. Ofcs. say that's dangerous-move to other car instead.

Several passengers were treated at the Fruitvale station in Oakland, Calif. by medics on Thursday, July 9, 2015.

BART thinks the fire was caused by an electric arc when the car lost contact with the third-rail, which feeds power to the train's engine. The incident occurred on a recently replaced section of track.

It underscores that BART is showing its age. The breakdowns is a major sore point among passengers. "There are a lot of problems happening regularly and that's the frank reality of having a system that is as old that it is today. I mean our cars are from 1972 and our trackway, 90 miles of it, is from the same era," BART Communications spokesperson Taylor Huckaby said.

Some of us might drive a car for five or 10 years or maybe longer, but BART cars are 43 years old and some of the tracks are even older.

A BART committee is working on plans to submit a $3 billiion bond issue to voters next year to help pay for new tracks and other repairs. "It's about really understanding what is the track that is most at risk of failing and then making sure we're investing in replacing that particular track, not the stuff, that even though it's old, is still in pretty good shape," BART Board Director Nick Josefowitz said.

Just two months ago, a tear in new track was discovered that could have caused a derailment.

Crews are still working to repair damage as an investigation is underway.