KGO
By by Cornell Barnard
SAN FRANCISCO (KGO) -- A record number of runners hit the streets on Sunday for the 40th Annual San Francisco Marathon. Thousands of people ran past some of the city's well-known landmarks.

It was the biggest race ever for the Bay Area, with extra steps taken to keep runners safe.

Sunday's marathon celebrated a milestone and the biggest race ever for the Bay Area. This year, terrorism concerns forced officials to take unprecedented steps to keep runners safe.

Finishing the race earned you a medal and some bragging rights. Jorge Maravilla, a 39-year-old Mill Valley resident, jumped for joy after winning the marathon with a time of 2 hours and 28 minutes.

"We all share one common thing, and that is to get to the finish line. I'm fortunate to be a part of that community," he said.

Devin McMahon, a 25-year-old from Stanford, was the top women's finisher at 2 hours and 52 minutes.

A record 27,500 runners were not far behind, including first-timer Peeyush Rathkanthiwar from Fremont, who told himself to keep going. "The first thing that came into my mind when I cried is like never give up. Anything in my life that comes as an obstacle or a hurdle, I'm never going to give up," he said.

There was a large police presence along the 26-mile course. The SFPD bomb squad was staged near the finish line. And for the first time in the marathon's 40-year history, all northbound lanes of the Golden Gate Bridge were closed for three hours because of terrorism concerns.

"We are excited to have worked with the Golden Gate Bridge District and all the local authorities to ensure that we were able to do that for runners' safety," SF Marathon's Michelle La France said.

The finish line is the last place you'd expect to see a wedding proposal, but Alex Kermani popped the question and Mariza De Souza said yes. "Obviously, I was hoping it would happen. But I didn't know it would happen on the finish line," she said.
Report a correction or typo
Related topics:
sportssan franciscogolden gate bridgemarinhealthfitnessrunninggolden gate bridgemarathonstraffic delay
Copyright © 2021 KGO-TV. All Rights Reserved.
RELATED 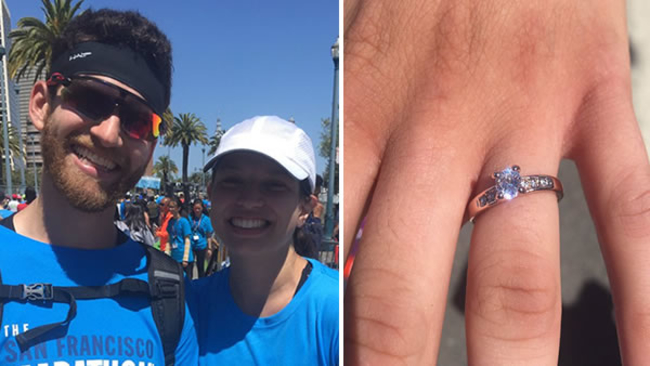 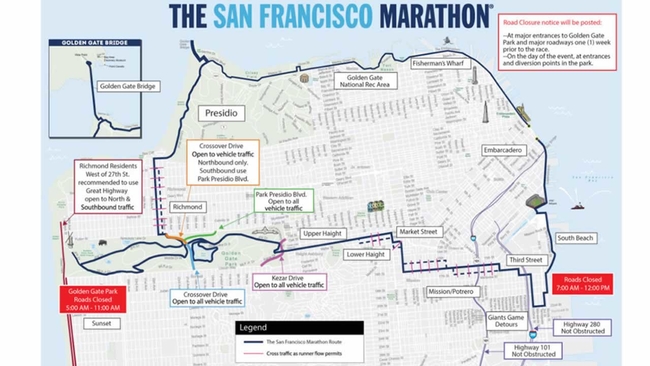