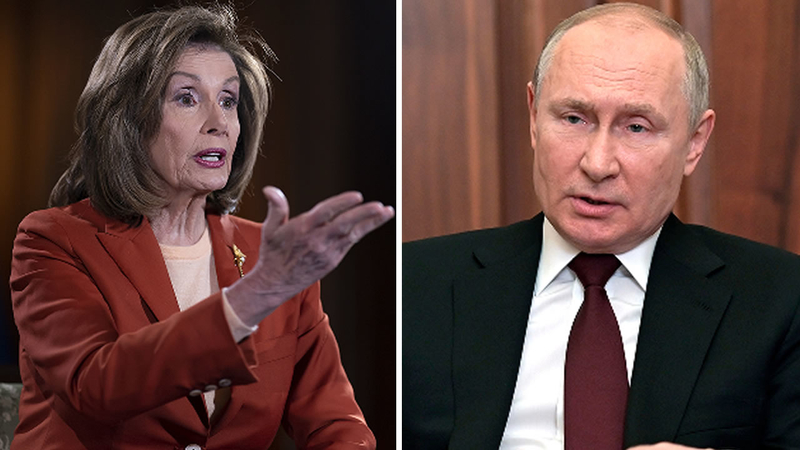 Her speech did not mince words when it comes to Putin's decision to invade Ukraine.

"We're not going to let him provoke WWIII, but we are going to make sure he is debilitated," said Speaker Pelosi, defending President Biden and the Russian sanctions.

When asked if she's satisfied with the strategy to stick with sanctions, or if another option should be considered, she responded, "No. I think that we're very blessed to have this president with his knowledge of foreign affairs, his understanding of the personalities that he has to deal with."

Pelosi made clear the sanctions are a NATO decision, not solely up to the discretion of the United States.

"And what the president said today is to ratchet it up and that's what he's doing and the package is very, very devastating to Russia," said Pelosi.

Meanwhile in Ukraine, the people are bracing for the worst.

"It gives you goose bumps, shivering and everything possible," said Irene Nemyrovych, who fled Kyiv in the early morning hours.

"I was very stressed because I was driving the car with my grandparents and we saw some shell bombings near the roads because they were trying to target the military bases," said Nemyrovych, noting it took more than four hours to travel just 15 miles to her parents.

"What my family is doing now is they're taking tape and they are trying to fix the windows so if the bombing happens near the windows, they don't shatter us with glass," said Nemyrovych, adding that she's confident in Ukraine's armed forces, but understand they are grossly outnumbered.

"A lot of power now is with people of different nations and only they can do something to help us stop this," she said.