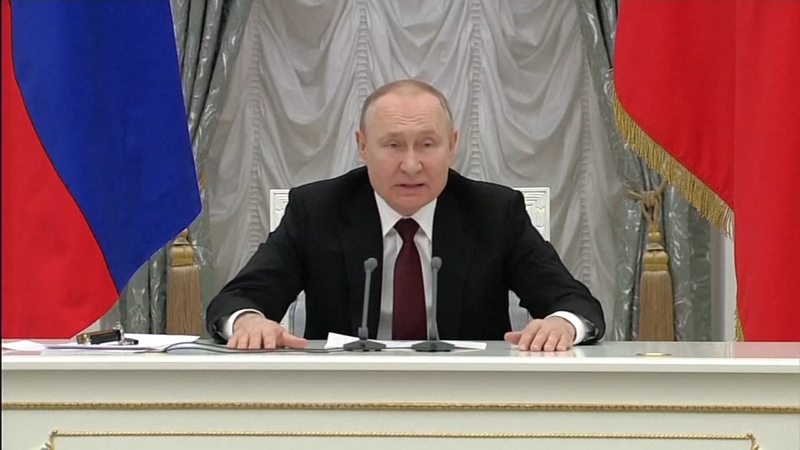 Russian President Vladimir Putin signing a decree recognizing independence for Donetsk and Luhansk, two Ukrainian regions at the center of an ongoing conflict between the two Eastern European nations.

The U.S. and its allies calling the move a dramatic escalation and a pretext to a larger scale invasion.

"For him, his main mission in office is to restore what he regards, what he is now calling, historic Russia. And that means taking over Ukraine," said Steven Fish.

Fish is a professor of political science at UC Berkeley, who has studied authoritarianism and post-communist countries.

He says the current situation is the biggest security crisis in Europe since the end of the second world war in 1945.

"This returns Europe from the 75 years of peace that it's had to a world of war," Fish said.

California's already record-high gas prices are expected to get even more expensive in the coming months, fueled by the crisis in Ukraine.

In response to Putin's actions, Western countries including the U.S., announcing new sanctions against Moscow and calling an emergency meeting of the United Nations Security Council.

At that meeting, overwhelming calls for Russia to de-escalate the situation and stop further advances into Ukraine.

"I suspect right now his plans are to push further and to actually take territory," Fish said.

But some 6,000 miles away from the Ukrainian-Russian border, the local Ukrainian community here in the Bay Area is also feeling the strain.

RELATED: Why Americans should care about the Ukraine-Russia conflict
EMBED More News Videos

What to know about the role the U.S. plays if Russian troops invade Ukraine.

Nick Bilogorskiy is the co-chair of Palo Alto-based charity Nova Ukraine, and has family still in the country.

"I feel like I should be there trying to protect them. I don't think I can fly there because the airlines are no longer flying there. I'm trying to convince them to leave," he said.

Bilogorskiy and other local Ukrainians have spent the last several weeks calling for elected leaders to take a hard line against Vladimir Putin.

Asking Western officials to support the Ukrainian people in a time of need.

"Our people are strong and resilient. And we will survive this, and we will win," Bilogorskiy said.