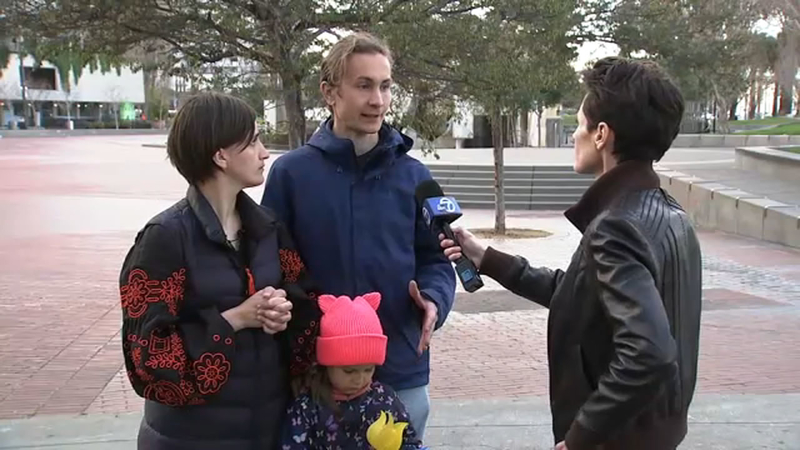 SAN FRANCISCO (KGO) -- As the threat of war looms, anxiousness is rising among the local Ukrainian community.

"We have our parents, we have our relatives and we have to return to Ukraine," Yuliia Bezvershenko, who's living and studying in the Bay Area.

She is set to return to Ukraine this summer with her husband and young daughter, but is well aware of the battle ahead.

"The majority of our colleagues there won't leave Ukraine, they will fight in their positions."

Dozens showed up to San Francisco's embarcadero Sunday to show their support for Ukraine as tensions continue to rise over possible Russian invasion.

While the Bay Area feels further from home than ever the young family finds some peace in staying connected.

"It's helpful to continue to have my network with friends that are now in Ukraine," said Oleksandr Skorohod, noting they are also staying close to other supports, such as Nova Ukraine, a local nonprofit raising awareness about Ukraine.

Igor Markov is on board and also has family in Kiev. "I'm very worried about them and we've discussed potential scenarios in which they would need to relocate," said Markov. "I suggested they get enough food that they don't need to leave their building for a few days if things get bad."

"It's a feeling of anxiety," said Bezvershenko. "But it wasn't started yesterday because we are in this situation since 2014."

RELATED: The CEO and the employee: How an SF company is working to protect workers in Ukraine
EMBED More News Videos

Hundreds of a San Francisco company's workers are in Ukraine. Here's how the CEO's trying to protect his employees amid threats of a Russian invasion.

That year saw deadly political unrest and Russia annexing Crimea, with the fight between Ukrainian forces and Russian-backed rebels ongoing.

"We became more resilient and more prepared for this battle because eight years it was such a mess." Skorohod. "Even though we know we have to do this or we could wake up and not have a country," added Bezvershenko.

A country - both hoping to take their daughter home to.