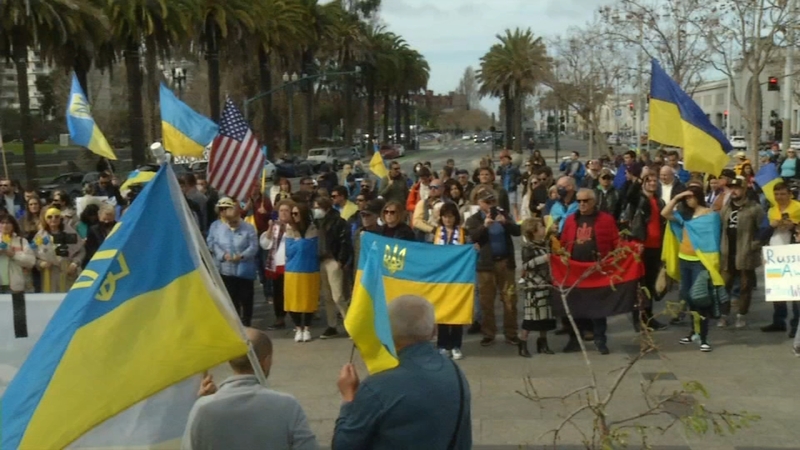 SAN FRANCISCO (KGO) -- With tensions continuing to rise in Ukraine, some 6,000 miles away along San Francisco's Embarcadero, dozens showed up in front of the ferry building to show their support for the Eastern European nation.

"We find this absolutely disgusting that the world does not stand up to Putin in the way it should and stop Russian war in Ukraine," said Nick Bilogorskiy.

Bilogorskiy is the co-chairman of Nova Ukraine, a charity based in Palo Alto.

He says he worries that the country of his birth is on the brink of a major catastrophe.

"I am angry and I am anxious. I'm worried for my family in Kharkiv, and I'm worried for all the families of Ukrainians that will need to evacuate or need to fight," he said.

HAPPENING NOW: Protesters are gathering in front of the ferry building in SF in a show of support for Ukraine as tensions continue to rise. Story at 5 & 6 on @abc7newsbayarea #UkraineRussiaCrisis pic.twitter.com/OVcIK05y5u

Organizers estimate that around 150 people showed up to Saturday's rally.

Many of them Ukrainians worried about their loved ones back at home.

"It's really important for people to understand that this is not just some very small Eastern European country. There's actually a lot at stake," said rallygoer Vira Iefremova.

But also many Americans.

WATCH: Why Americans should care about the Ukraine-Russia conflict
EMBED More News Videos

What to know about the role the U.S. plays if Russian troops invade Ukraine.

Keen to show their support not just for the Ukrainian people, but also for fundamental values such as freedom and democracy.

"If we really about those things, we really care about a world where it's not just might makes right and a big country swallows up another country and breaks it up, then Ukraine matters profoundly," said rallygoer, Steven Saum.

And while the world waits with baited breathe over what might happen next, Bilogorskiy says he'll continue speaking out.

Being a voice for his country in one of its greatest times of need.

"I would like to see more Americans stand up and say down with Putin. We support Ukraine. We support peace. We cannot let them start a war," he said.