The expert explains, "It's going to take us maybe a year or two to get back to normal."
KGO
By Zach Fuentes 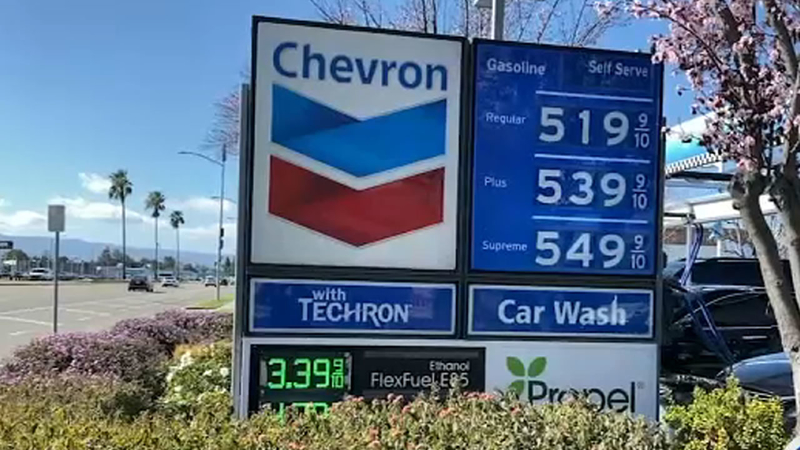 SAN JOSE, Calif. (KGO) -- California's already record-high gas prices are expected to get even more expensive in the coming months, according to experts, and it's all being fueled by the crisis between Russia and Ukraine.

The state began setting gas price records at the end of 2021 and hasn't stopped since, hitting a new record high at $4.71 a gallon on Feb. 16.

Now experts are predicting that the average price of gas in the Golden State will soon be right at $5 a gallon.

"If Western countries come after Russia with sanctions, Russia could just say, 'Hey, we're just going to cut off oil,'" explained Patrick De Haan of GasBuddy. "And that could cause oil prices to spike at a time that gasoline demand is continuing to recover as COVID numbers decline."

And the pain at the pump will be even worse for certain parts of California.

"It's very likely that the Bay Area, especially San Francisco and San Jose will get to that $5 gallon average," said De Haan. "Prices in the Bay Area today average about $4.81."

Further complicating the California gas price situation is the state's pending increase to the state gas tax in July 2022.

California taxes gas at 51.1 cents per gallon, second only to Pennsylvania, according to the Federation of Tax Administrators. The planned tax increase is tied to inflation, which is surging. Last summer the tax increased from 50.5 cents per gallon.

Governor Gavin Newsom has floated a proposal to halt the July gas tax increase, but some Democratic legislative leaders expressed reluctance because the resulting $500 million in taxes goes to vital programs.

Regardless of what happens with the state gas tax, drivers are already expressing major concern with the surging prices.

"Over one hundred dollars for my truck and I have a car that gets great gas mileage and it costs me sixty dollars to fill it up so it's expensive," said Jim Brinkerhoff of Santa Clara County.

Other drivers are already looking for ways to avoid the high gas prices altogether.

"I have an electric car and I drive my bicycle," said Chris Kortright of Santa Clara County.

Also, the U.S. and Iran are talking about a new nuclear deal, which could mean we'd get crude oil from that country again.

However, De Haan predicts it will be a while before the pain at the pump truly subsides.

"It's going to take us maybe a year or two to get back to normal. And for all of these issues to fade to the backdrop before we start to see more of what Californians have grown accustomed to that is $3, $4 dollars a gallon prices."