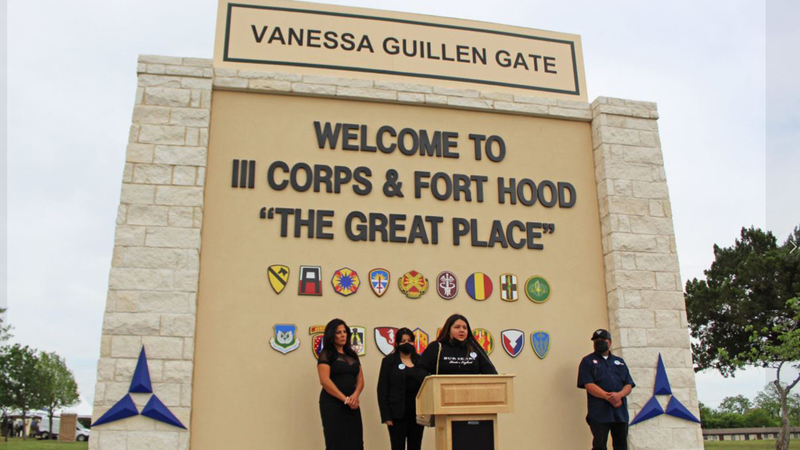 Guillen's family continues to fight 1 year after her death

KILLEEN, Texas -- Army Spc. Vanessa Guillen's life was honored at Fort Hood Monday afternoon when a gate in her memory was unveiled at the post.

Guillen's family members were part of the design process, but they weren't all at the dedication ceremony.

Gloria Guillen, her mother, was absent. She has been critical of the Army's handling of her daughter's case.

Lupe Guillen, one of Vanessa's sisters, also explained that their mother wasn't present because she was overwhelmed with emotion.

"It's very emotional for me to be here, but like we said, we have to pass legislation in order for this to stop, in order for these cases to decrease. It had to take my sister's life in order for us to realize the bigger issues. Sexual violence is not an issue, it's an epidemic inside the armed forces and she had to die. She had to be murdered and dismembered and burned in order for all of us here to realize that this has been happening for decades," Lupe said.

The memory gate was first announced last November, five months after the Houston native's remains were found on June 30, 2020.

The gate is also symbolic. It's the exact gate where people rallied for those in power to take Guillen's disappearance seriously.

Guillen was killed at Fort Hood after she went missing on April 22, 2020. She was bludgeoned to death by Spc. Aaron Robinson, who killed himself on July 1 as police were trying to take him into custody.

Guillen's family has said Robinson had sexually harassed her, but the Army has said there is no evidence supporting the claim.

It's also accessed by thousands of soldiers, civilians and families every day.

The family's attorney, Natalie Khawam, expressed last November how significant it is to have the gate bearing Guillen's name.


"They could have easily said, 'We don't want this out there... we don't want to be known for this blood stain.' But rather, it's the opposite. They didn't try to sweep it under the rug. They put it, visibly, right in front of the gate of the base. So every day they have to remember Vanessa. They have to remember what happened here so it never happens again," Khawam said at the time.

"That is so important. And it was very symbolic. They explained to us how they are putting this gate outside and if you walk a straight line, you walk into Vanessa's barracks," she continued. "It's important that we walk the straight line. We never let this happen again."

FROM NOVEMBER 2020: The full statements from the Guillen family and their attorney are in the video below.
EMBED More News Videos

From just outside Fort Hood, Vanessa Guillen's family talked about the progress being made between them and military officials after their loved one's murder. In the video, they explain what the base is doing to honor the Houstonian.

One of Guillen's sisters shared in a tweet on Sunday that a series of events are lined up to honor her memory all week long.

The family is planning to travel to Washington, D.C. to reintroduce the #IAmVanessaGuillen bill on Thursday that aims to change how the military handles sexual assault and harassment allegations.

House speaker Nancy Pelosi is expected to be there to announce her support.

Please share. This means a lot to us. #iamvanessaguillen pic.twitter.com/mzyTYU4VQC

Vanessa Guillen's legacy enters Capitol Hill in the form of a bipartisan bill aimed at reforming sexual assault in the military. The video breaks down what has gone into getting to this point.

Congress is stepping in and investigating the disappearances and deaths of soldiers at Fort Hood. Watch the video above for more details on the cases involved.