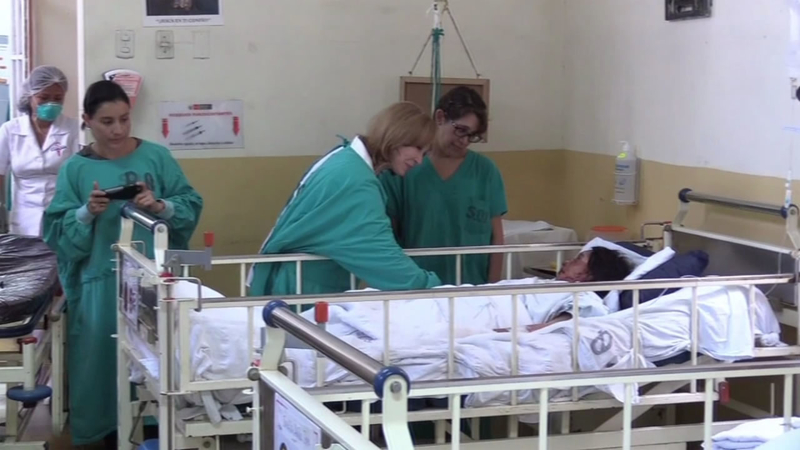 The co-founder is from Peru but raised her family in the Bay Area.

VIDA stands for Volunteers for Inter-American Development Assistance. It's changing lives at the most basic level.

It has tremendous support with Bay Area companies and people here and in Lima, Peru, starting with its glamorous 25th anniversary gala.

Pasquale Esposito, a prominent opera singer, and his musicians came all the way from San Jose to Lima to pay tribute to the beloved president of VIDA USA at a spectacular 25th anniversary gala, with 900 donors and the Consul General of Peru in San Francisco, Candy Chavez.

Haydee Rodriguez-Pastor is the co-founder of VIDA USA and VIDA Peru. She inspires people because of the work being done by the nonprofit she started in the East Bay with her late husband, Carlos.

He started a bank in Peru, which is the main sponsor for VIDA Peru.

A deadly illness prompted the birth of the charity. "Because of the cholera epidemic in the year 1991. It was coming from Peru to North America, so we decided we had to help stop it," Haydee said.

The infrastructure was already there after the epidemic ended, so Haydee and her team built it into a life-saving powerhouse that ships containers full of surplus medical equipment and supplies to Peru.

It also helps millions of other people in at least a dozen Latin American and Caribbean countries.

"I took care of the Peruvian side, while Haydee was pushing all the logistics from the United States, which is the most important part," VIDA Peru Board President Leslie Pierce said.

The need is enormous. Thousands and thousands live in shacks without running water or sewage systems.

They don't have health insurance. But they can get first-class or free or low cost medical services at hospitals served by VIDA, like Arzobispo Loayza Hospital in Lima.

"Medical instruments that permit us to do our work in a better way," Dr. Edgar Ruiz said.

"Everything from a syringe to a bandage to a $10,000 surgical medical kit for open heart surgery," Haydee's son-in-law, Adam See, said.

It all starts in Emeryville at VIDA USA's 6,000 square-foot warehouse, where Haydee and Adam gave ABC7 News a tour.

Adam runs the program here. These items could have been thrown into a landfill, but businesses and individuals choose to recycle.

"Stanford, being our biggest donor, but the Kaisers, the UCSFs," Adam said.

Every item has to be carefully logged and tracked. Volunteers like Novartis' David McKenney, from businesses or schools, help sort equipment and supplies.

"I couldn't believe what waste went on and so the fact they could take these supplies and put some good use is something I thought was worthwhile," David said.

Steve dropped off supplies donated to a recycling company called ReCARES. "I can't get these back into the community," he said.

A gently used boot will help a young mother of two at a hospital served by VIDA. "When she was cooking, she opened the pot, burned her legs," Loayza Hospital nurse Sylvia Escalante said.

The main burn unit in Lima is at the old hospital. Men and women are in the same room.

They're grateful for VIDA's help but the need never ends.

"We need medications, we need like antibiotics," Sylvia said.

"We really appreciate it when people from other countries, especially from the United States and especially from San Francisco, are taking care of our people here in Peru. We really feel the warmth of the people when they do that with their hearts," Leslie said.