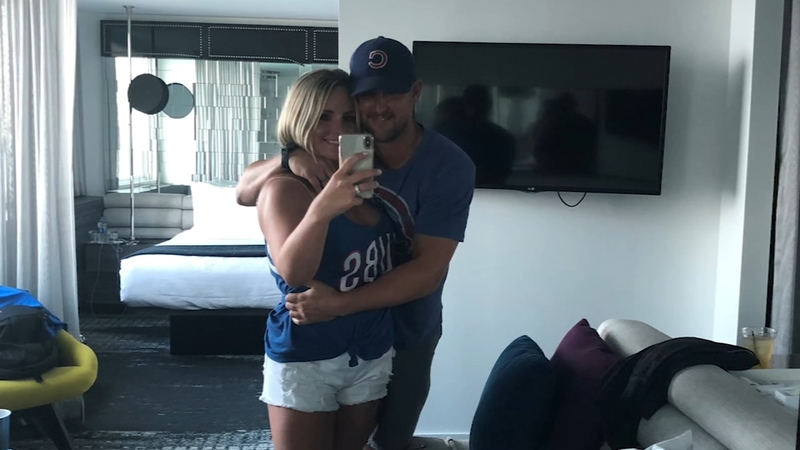 CHICAGO -- Someone could be living it up in a hotel room using your existing reservation. One couple said their hotel stay was hijacked recently and caused their hotel bill to more than double.

The couple said strangers extended their hotel reservation and that they now owe thousands of dollars for an additional room they never stayed in.

Hayley Wells and her husband recently spent four nights in the W Hotel Lakeshore. They said their stay was stellar-- until they got the bill.

"I'm so upset and angry and I feel vulnerable and taken advantage of and a weekend that was supposed to be fun turned into something that I don't even want to think about it makes me sick," she said.

Wells said two days after arriving home in Omaha, Nebraska, she got a new bill from the W.

"I received another folio from the W Lakeshore saying a total of $6,539 and saying I was checking out that morning," Wells said.

It was three extra nights in a room she said they never stayed in, with additional charges totaling nearly $4,000. It included all of the amenities like internet access, car valet, phone call charges and lots of room service.

"They called me and basically told me that I was responsible for all of these charges and it was because, somebody, a name I don't even know, had been added to my reservation. I didn't add anybody to my reservation," she said.

Wells showed the I-Team her original W Hotel check-out bill and airplane records showing the couple left Chicago and was home while the other room was being used. She has lunch receipts from the layover in Minneapolis. She even supplied us with time-stamped video of herself at home in Omaha. All of this evidence, Wells said, was offered to W Hotel. The I-Team also obtained the police report Wells filed.

"How does it make you feel that the hotel doesn't believe you?" Jason Knowles asked.

Wells said the W insisted that she allowed the mystery person to be added on to her reservation.

"I would assume that if somebody had been added to your reservation you would have to be present with my identification," she said.

Governors State University expert William Kresse, also known as "Professor Fraud" said it's possible for reservations to be changed if you're not present at the desk but that hotels should confirm changes.

"It's just good practice, good protocol. A lot of the best hotels will do that, if there is any change in your reservation they will send you an email that should have happened," said William Kresse.

The Director of Operations at the W Chicago Lakeshore sent this email to the I-Team, saying, "We take information security very seriously and have measures in place to protect guest data. We are aware of this matter, have been in touch with the guest directly, and are investigating. Due to privacy, we are unable to comment further."

"I'm told from people in the fraud industry that this is a fairly common scam," Kresse said.

Kresse said sometimes scammers can take someone's reservation by accessing their room and key cards in their room after they check out.

"Turn the key cards in, get a receipt, walk away knowing you have proof that you checked out of the hotel and any additional charges are not yours," Kresse said. "An old school check out... could be inconvenient but in the end could be a lot more convenient."

"What it comes down to is they had a huge breach in security. And it's extremely scary and vulnerable to know that something like this can happen," Wells said.

Wells has disputed the charge with her credit card as she waits for the W's investigation.

To prevent someone from stealing your reservation experts say you should also beware of people behind who may be listening for your room number.

Sometimes those scammers can sweet talk their way into a room, extend the reservation by calling from the room or grab the keys if they're in the room.