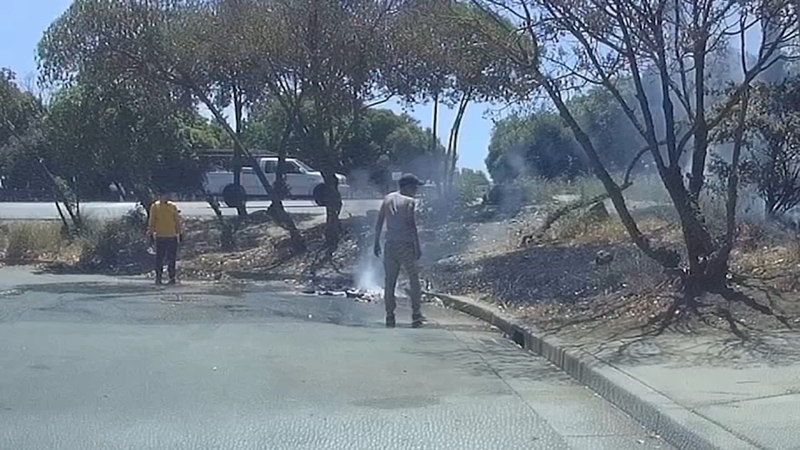 On Monday, families living near East Capitol Expressway and Senter Road described the firsthand fire fight as neighbors did what they could to keep flames from spreading.

Dorothy Dang told ABC7 News, "My father tried to get the hose from right here to help blow it out, but the hose wasn't extending far enough to reach all the way over there."

Dry conditions and dangerously hot temperatures across the region have created a recipe for disaster. With temperatures reaching the low-90s in San Jose on Monday, neighbors said while many were quick to take action on Sunday afternoon, they remain concerned about the heat.

Dang and her mother, Hoa Do, said a couple of strangers also stopped to help on Sunday afternoon. The good Samaritans included one driver who used his extinguisher to try and put out two fires.

In video shared with ABC7 News, viewers will notice a second column of smoke, tucked away between tree trunks.

It's go-time for these goats, as they play a key role in a fire season that's heating up, months ahead of schedule.

ABC7 learned the man with the extinguisher is a Marine Corps veteran and current California National Guardsman. He explained there is no hesitation when it comes to serving and protecting the community.

He asked to remain anonymous, but shared dash-cam video which showed others on-scene.

"Another man was trying to use sand to try to blow it out," Dang shared about a second stranger. "There was many people helping together."

Off-camera, other neighbors mentioned the fiery scene isn't new, and put the blame on the unhoused population in the area.

"We all worry around here," one neighbor told ABC7 News, "So, this is not the first time."

About a mile away, a much larger burn scar was noticeable at the southbound 101 on-ramp.

"The one down the road was actually bigger," Dang said, on behalf of her mother. "And the firefighters actually went to that one first."

The available dash-cam video shows the moment the San Jose Fire Department (SJFD) arrived on-scene near E Capitol Expressway and Senter Road. They arrived just minutes after many took matters into their own hands.

ABC7 News reached out to SJFD about the incident. However, no one was immediately available.