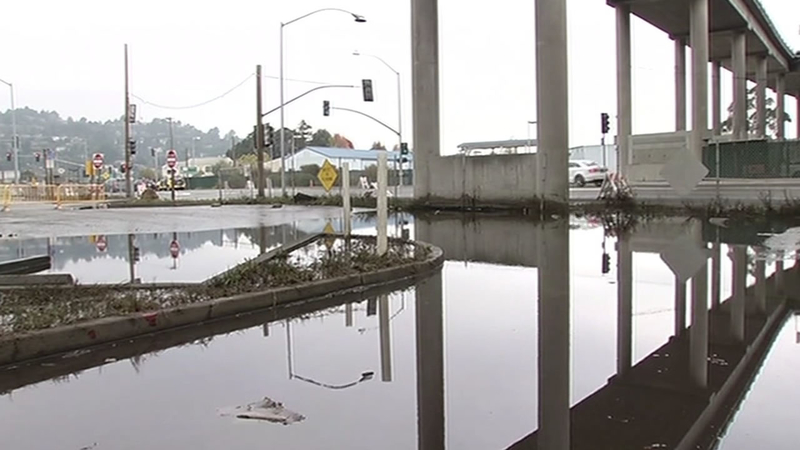 MARIN COUNTY, Calif. (KGO) -- It is about to get wet and cold in the Bay Area. The next storm system is bringing rain to the Bay Area and lots of snow to the mountains.

The Sierra is anticipating lots of snow from this cold storm. At Heavenly Mountain Resort in Lake Tahoe, they have a nice cover already and could get another two feet of snow over the next few days. If you plan to enjoy the snow this holiday week, pack your chains if you're driving up after the snow starts falling.

In San Anselmo and Marin County, they have seen their share of damaging storms and floods in the past. In 2005, on San Anselmo Avenue they had a flood that rose a couple of feet -- and that wasn't even an El Nino year.

If you live in San Anselmo, in the shadow of the flood warning horn, you know it's a question of when there will be floods, not if.

"It happened before and all indications are that it will happen again," Brad MacKenzie, owner of 3 Ring Cycles, said.

MacKenzie owns a bicycle shop and a floodgate. He came to town after the disastrous flood of 2005 -- the one that surprised everyone after another in 1982, which was a lot like the one in 1925.

San Anselmo Town Manager Debbie Stutsman said if they get that same amount of rainfall, they will likely flood again. Expecting a flood a few feet high, makes the inconveniences we found elsewhere on Monday, seem trivial by comparison.

Here's a warning for the week -- do not park your car during a king tide in Mill Valley's Manzanita Park and Ride Lot.

With rain and tides coming, tow truck driver Walter Rivas expects to return, frequently. He told ABC7 News, "Every year, it happens, the same thing. Always in the high time."

Our highest peaks may see snow just before the holidays! Snow level drops to 3,000' possibly 2,500'. pic.twitter.com/2FI9bBndc5

In the North Bay on Monday there was also lots of preparation. One resident had an arborist cutting down a very tall tree in their yard.

"If the wood is really brittle from the drought, the roots are stressed, we're going to have a problem this winter," Tad Jacobs from Treemasters said. "We've had more [problems] this summer than we've had in most winters. It's going to be catastrophic if El Nino comes in as predicted."

San Rafael residents Don and Cherie Herzog didn't want to take down one of their tall pine trees, but experts told them either they take down the tree or it could wipe out their house.

Cherie said, "Thirty-nine years ago we moved in and this tree has kept us cool in the summer and keeps the warm air here in the winter. And it's beautiful, I just hate to lose it."

With storms on the way, it's best to be proactive and decisive.

In Napa on Monday, crews began the process of protecting the historic Napa County Courthouse from the upcoming storms. The courthouse has been closed since it was damaged in last year's earthquake.

Temperatures will plunge behind the storm.. at/below freezing WED-FRI! Expected to be coldest air of season so far. pic.twitter.com/6TZTC6sFzA

when #kingtide and #rain converge, this place turns almost into an Everglades pic.twitter.com/h5vczKmMuM

#kingtide #millvalley "They never seem to learn," said tow truck driver. He expects to get some work here this week. pic.twitter.com/52nKaXOMhi

#kingtide The interior of this car was sloshing. pic.twitter.com/RA7ZzjLKhQ

#elnino ...the end of a 90 foot tall Monterey Pine that towered above the house. pic.twitter.com/A3OoJJLD9N