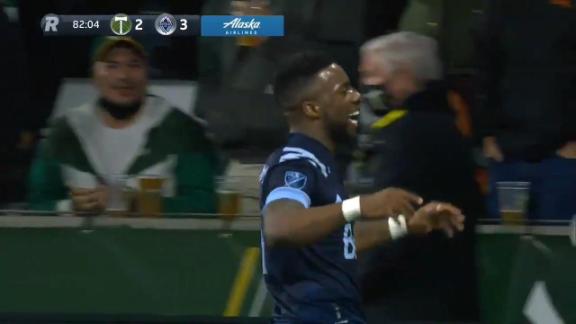 The Vancouver Whitecaps and San Jose Earthquakes split the points when they played to a 1-1 tie on Saturday in a late-season Western Conference match with playoff implications.

Vancouver (11-9-11, 45 points) was able to hold onto the coveted seventh and final place in the West standings, two points clear of eighth-place Real Salt Lake and three in front of Los Angeles FC with three matches to play in the regular season.


The Whitecaps are unbeaten in their past three matches (two wins and a draw) and have lost just once it their past eight contests.

The Earthquakes (9-12-10, 37 points) stayed mathematically alive for a spot in the postseason because neither Minnesota United nor Real Salt Lake won on Saturday. San Jose is in 10th place in the West, seven points under the playoff line and behind three teams with three matches left in the regular season.

After a scoreless first half, the match opened up after halftime. Bruno Gaspar got the Whitecaps on the board in the 53rd minute with a left-footed shot from deep inside the zone into to the top left-corner of the goal as he cleaned up the rebound of a shot by Brian White.


But the Earthquakes responded, tying the game in the 60th minute on a goal by Benjamin Kikanovic made possible by a crossed assist into the goal mouth by Cristian Espinoza.

Vancouver goalkeeper Maxime Crepeau jumped on a loose ball in the goal mouth in the 90th minute to keep the draw alive. He made two saves, as did San Jose keeper JT Marcinkowski.