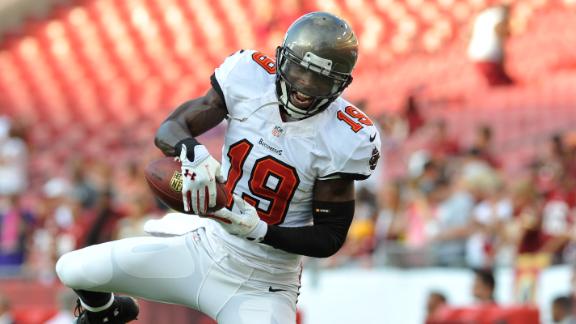 Williams' brother is suspected in the stabbing and is being sought by police, Nunez said. The Tampa Bay Times reported Williams was treated for a relatively minor laceration at St. Joseph's Hospital and released.

According to the Times, the sheriff's office issued an arrest warrant Sunday night for 23-year-old Eric Baylor on a charge of aggravated battery/domestic violence after deputies were called to Williams' home in the Avila community north of Tampa.

The Buccaneers released a statement Sunday, claiming that they were aware of the situation and that the team's primary concern was Williams' well-being.

Bucs general manager Jason Licht reiterated those sentiments Monday but also said that the team has not heard from Williams.

"We've reached out to Mike. We've yet to hear from him. From what I understand, he's been treated and released, so that's a good start. We're trying to gather all the facts we can."

Sunday's incident is the latest off-the-field issue for Williams, who signed a six-year, $40.25 million deal with Tampa Bay last July. Williams faces misdemeanor charges of criminal mischief and trespassing, and has also paid more than $43,000 in damages for destructive house parties.

"There's a pattern here and it's disturbing. No one is bigger than this football team," new Bucs coach Lovie Smith said in February. "He has to understand that."

Williams, 26, caught 22 passes for 216 yards and two touchdowns in six games last season, his fourth with the Bucs.