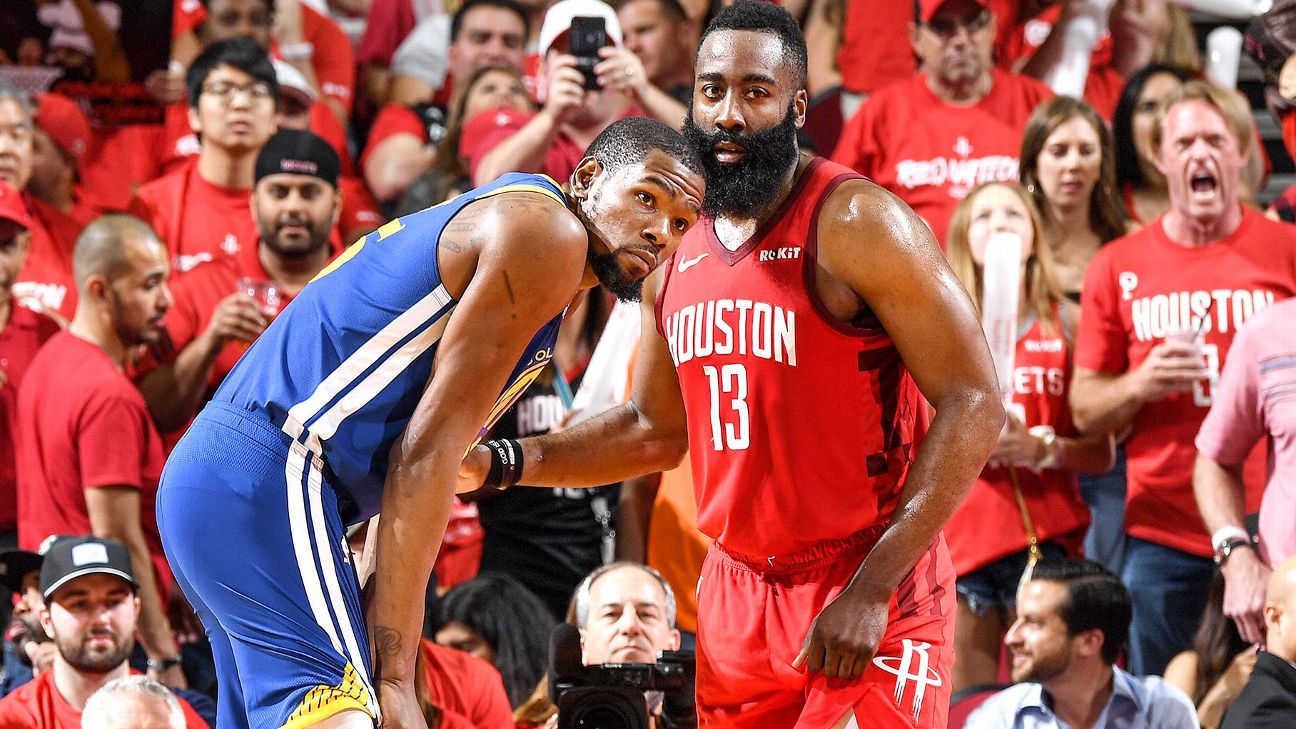 HOUSTON -- Last summer, while the basketball world reacted with shock, awe and frustration when the Golden State Warriors signed DeMarcus Cousins, it was easy to miss just what sort of gamble was being taken.

Not just a wager that Cousins would get and stay healthy -- ultimately, he wasn't able to -- but because signing him meant the Warriors had largely spent their free-agency dollars in one move.

They'd had visions of remaking their bench with David West retiring and Nick Young, JaVale McGee and Patrick McCaw among those leaving. But left with nothing but minimum-salary dollars to offer, it really didn't happen. Now deep in the NBA playoffs (Warriors vs. Rockets Game 4, Monday 9:30 p.m. ET, TNT), those choices have left them uncomfortably thin.

Warriors coach Steve Kerr has never ridden his front line like he has so far in their intense series with the Houston Rockets, stretching stars to the limits. His starters are all averaging more than 35 minutes, with Kevin Durant, Klay Thompson and Draymond Green each averaging over 40. Stephen Curry probably would be there, too, but foul trouble in all three games has sent him to the bench frequently.

Granted, overtime in Game 3 forced everyone's hand and has skewed the numbers a little. But Durant has spent only 12 total minutes on the bench in the first three games, averaging a stunning 45.6 minutes thus far.

Andre Iguodala, promoted into the starting lineup this series for matchup purposes, is averaging nearly 36 minutes. He played more than 30 minutes only three times during the entire regular season. In Game 3, the overtime pushed him to 40 minutes on the floor, the first time he has reached that mark since December 2016.

Those extra minutes are taxing. Iguodala has often been the primary defender on James Harden and his energy-zapping isolation plays.

"[Fatigue] doesn't matter, you have to play," Kerr said Sunday. "You've got to do what you have to do to win the game. Our guys are in great shape and we've got a day's rest [before Game 4 on Monday]."

That sentiment is probably a front; Kerr certainly has to be worried about the mounting court time. Yet he was left with little choice in the second half of Game 3 as his reserves were routed in the first half, especially when he went deeper to Jonas Jerebko and Andrew Bogut.

Cousins is out because of a thigh injury. And with Iguodala -- who has become so used to being a bench player that his memoir due out in a few weeks is titled "Sixth Man" -- in the starting lineup, it has fallen to Shaun Livingston and Kevon Looney to be the first players off the bench. Looney is minus-10 for the series and Livingston is minus-15 over the past two games.

It's not hard to figure why Kerr has had to rely so heavily on his starters.

"We're not going to be playing a lot of guys," Kerr said. "This is a tough series to go deep into your bench because they've got three guards that can get to the rim and they put a lot of pressure on you."

The Rockets feel the same pressure. For example, even with the constant concern about protecting Chris Paul from overwork because he tends to be susceptible to hamstring injuries, coach Mike D'Antoni is playing Paul an average of 40 minutes a night in the series. That's a big jump from his season average of 32.

In terms of depth, though, the Warriors lag behind the Rockets, and it has shown in the bench production. It's true that bench players tend to perform better at home than on the road, but the Rockets' reserves outscored the Warriors 21-7 in Game 3.

Golden State had hoped to be able to add to the roster via the buyout market during the season, something the Rockets did effectively by landing Austin Rivers and Kenneth Faried. But it didn't materialize for the Warriors, as some available players, fearing a limited role, signed elsewhere. Others never became available.

For example, they'd had their eyes on Chicago Bulls center Robin Lopez for months, but Lopez didn't get bought out. Instead the Warriors signed Bogut, who has only been able to help in short bursts.

The Rockets are already finding ways to add to the Warriors' workload. After Green was so effective in Games 1 and 2 at defending at center, Houston spread its pick-and-roll game out more in Game 3 to force Green to expend more energy and cover more ground. Over time, adjustments like those could have a wearing effect.

Green is averaging 10 more minutes a game in this series than he did during the regular season and playing almost all of those minutes at center.

Still up 2-1 and feeling good about their chances, the Warriors are putting a good face on the situation. But if there's a way the two-time defending champs are showing vulnerability, it's with these mounting minutes. Even if it doesn't get them this series, the risk of injury and the long-term effects of such minutes are undeniable.

For a team that frequently looks invincible, this is a weak spot.

"In the playoffs it's a completely different mindset," Green said. "We have more than enough to win it all." 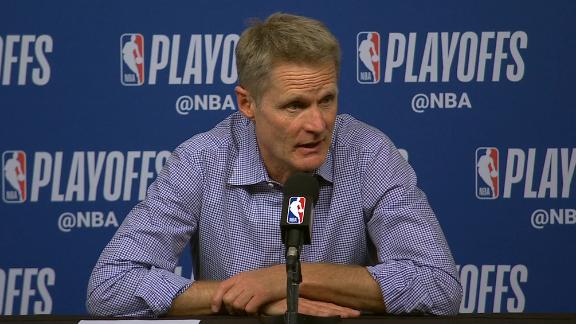 Kerr: It would have been a steal if we won this game
Steve Kerr says the Rockets deserved to win Game 3 because the Warriors made too many mistakes, and his team showed a lack of attention to detail.
Report a correction or typo
Related topics:
sportsespngolden state warriorsdraymond greennbaandre iguodala
Copyright © 2021 ESPN Internet Ventures. All rights reserved.
More Videos
From CNN Newsource affiliates
TOP STORIES