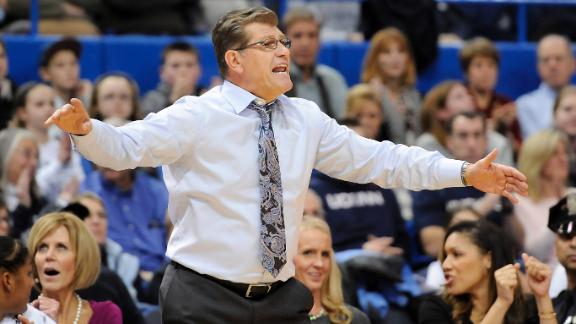 Geno Auriemma and his UConn Huskies are ready to begin their quest for a third straight national championship.

The Huskies earned the first overall seed in the women's NCAA tournament and placed in the Albany Region. They are looking for their 10th title, which would tie Auriemma with UCLA men's coach John Wooden for most all time.

"This is why you coach," Auriemma said of going for a third straight championship. "This is why you come to Connecticut if you are one of these players. Are we mature enough to handle it? We will find that out very soon."

Although Connecticut is favored to three-peat, Auriemma said winning another title isn't a guarantee.

"The fact that everybody thinks it's a done deal, that we're going to win the whole thing," Auriemma said, "those are probably people who have never coached, or haven't coached in a Final Four or have won a national championship."

Joining the Huskies as top seeds in the 64-team tournament that begins Friday are Maryland, South Carolina and Notre Dame.

Notre Dame and UConn, former Big East rivals, met in the national championship game last season as undefeated teams, with the Huskies coming away with the victory. The pair played earlier this season in South Bend, Indiana, and the Huskies won by 18 points. UConn also beat South Carolina on Feb. 9 by 25.

The Huskies, who are led by Breanna Stewart, seem to be improving and have been rolling -- winning games by an average of 42 points this season.

UConn will open on Saturday in Storrs, Connecticut, against St. Francis, Brooklyn, which is making its first tournament appearance. The Terriers (15-18) are the 10th team to enter the NCAA tournament with a losing record.

The Irish are the top seed in the Oklahoma City Region.

Notre Dame has played in the past four Final Fours but has come up short of a title each time. Baylor, Iowa and Stanford are the top seeds in the region that will try to derail the Irish.

The Gamecocks will face Savannah State in the first round, a team they beat by 62 points earlier this year.

"Obviously, last year left a sour taste in our mouths, and if ever you want a chance to do it over, I'd like to do it over," South Carolina coach Dawn Staley said.

Maryland is the top seed in the Spokane Region.

The Terrapins became the second team to go unbeaten in the Big Ten, the conference they just joined this season. They will open up against New Mexico State on Saturday.

Undefeated Princeton, which is the 15th team to enter the NCAA tournament unbeaten, is an 8-seed -- the highest in Ivy League history. The Tigers will face Green Bay. It's the third time in five tournament appearances that the Tigers will play in the 8 vs. 9 game.

"They had a historic year," NCAA women's basketball committee chair Dru Hancock said. "When it came to where to seed them, they didn't have any wins in the Top 25. Their strength of schedule wasn't great. Twenty-one of the 30 wins came with an RPI over 100.

"The committee is very excited about the Green Bay-Princeton matchup ... they'll have a chance to show the entire country what they can do."

Other teams in Spokane include No. 2 Tennessee and third seed Oregon State.

All teams in the field would like to reach the national championship game April 7 in Tampa, Florida. This season the women's tournament moved its games up one day in the first two rounds and the regionals. The Final Four is still being played on Sunday (semifinals) and Tuesday (title game).

The NCAA also decided to go back to rewarding the top 16 seeds with home games in the opening two rounds for the first time since 2003.

Because sites were awarded on merit, the Gamecocks were allowed to host the first two rounds even though the Confederate flag hangs on State House grounds. In 2001, the NCAA banned schools in South Carolina from hosting championships held at predetermined sites because of the state's decision to fly the Confederate flag. Mississippi schools face the same NCAA rules.

Third-seeded Louisville is the only one of the 16 teams not hosting, as the school's home arena is being used for the men's NCAA tournament. The Cardinals will head to South Florida to face BYU in the opener.