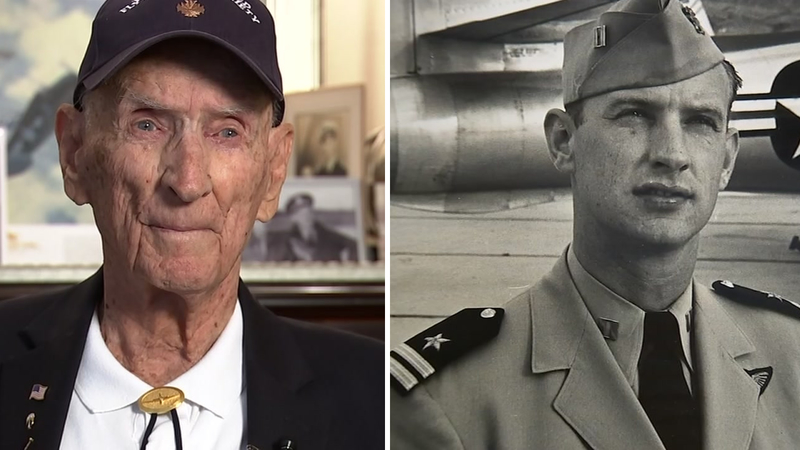 WALNUT CREEK, Calif. (KGO) -- A 97-year-old ace fighter pilot who served in World War II, the Korean War and Vietnam is flying to Washington DC this week to get the prestigious Audie Murphy award. He lives in Walnut Creek and shared his stories of glory with ABC7 news.

Commander Dean "Diz" Laird was born in 1921. Out of more than 1,400 ace pilots, he says he's one of 31 left. He shot down both German and Japanese aircraft. Here are excerpts of some of the stories he tells.

REPORTER: "When did you join the military?

DIZ: A week or two after Pearl Harbor.

REPORTER: "You signed up?"

DIZ: "Yes, I drove to the ferry building in San Francisco and signed up. I happened to become an ace because I shot down enough planes to qualify. The first Japanese airplane I shot down I gave a short burst and saw the tracers go right in front of him. So I dropped the site back a bit and squeezed it again and it burst into flames as he turned into me. And we passed each other only he was just a big ball of fire. In air gunnery was like sport to me. A lot of that came from hunting quail as a kid. I had 20/10 vision and I could spot planes way before anyone else could."

REPORTER: "Your memory is so sharp, so accurate about the details. Like you could really re-live every moment."

DIZ: "Some of those things are hard to forget."

REPORTER: "How old are you?"

DIZ: "Last February I celebrated the 58th anniversary of my 39th birthday. So working on 98 now."

In 1969 Hollywood came calling and Diz was asked to fly fighter planes in the movie "Tora!Tora!Tora!". In 1995 he re-visited Japan.