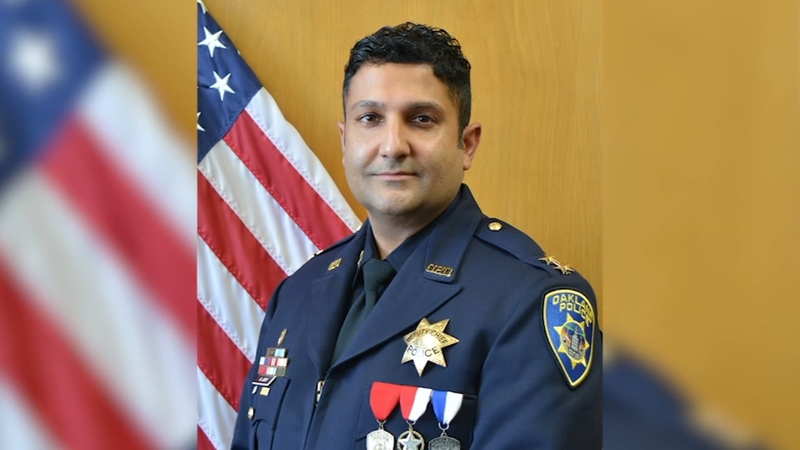 ALAMEDA, Calif. (KGO) -- Alameda's incoming police chief, Nishant Joshi, spoke to the ABC7 I-Team about how he plans to change the department over the next year.

Joshi previously spent more than two decades with the Oakland Police Department in a variety of roles ranging from training captain to most recently Deputy Chief. He will be formally sworn in on Monday.

The incoming chief is joining the department during a controversial time, a month and a half after 26-year-old Mario Gonzalez was killed while being pinned to the ground by Alameda police officers.

Here's the message Joshi had for the Gonzalez family:

"I want to absolutely acknowledge that anytime somebody loses their life, it's a tragic incident, and I want to call that out. I want to say for anyone involved, whether it be directly or indirectly, my heart goes out to them. I feel badly that we are in this situation, that's what I would say to Mario Gonzalez's family."

Stephanie: "Do you want officers within your department to continue responding to mental health calls?"
Nishant Joshi: "We always want to have mental health professionals involved in providing that service, but I think the deciding factor is if a person is posing an immediate threat to residents that requires police officers to provide that public safety."

In one of his first actions as chief, Joshi plans to provide the department with regular Crisis Intervention Team training, also known as CIT training. It's designed to connect law enforcement with mental health providers to learn how to identify resources for those in crisis. Joshi said having the training will make it easier to hold officers accountable to adhering to policy.

"So it's not just one training and it's done," Joshi said. "This has to be ongoing in order for us to really understand and adopt."

Alameda City Councilman John Knox White strongly believes police should not be responding to mental health calls so they can focus on violent crime.

"I'm never going to say additional training is a bad idea, but training in of itself is not going to solve the problem," White said. "We are short-staffed."

According to White, the department is currently short 18 officers and they've been struggling to recruit for the past 8 years.

"Our former police chief used to talk about how when he started 400 to 500 people would sign up every year and now they're lucky to get a dozen," White said.

The Alameda Police Department has been criticized for having a racist reputation for decades. Last June, the city made a significant push for police reform shortly after 44-year-old Mali Watkins was detained and cited by Alameda police after reports he was dancing in the street. The citation was dropped.

"You're dancing in the street," one officer said.

"So, what?" responded Watkins, before he was pinned face-first to the ground.

Joshi was not with the Alameda Police Department during this case, but was a resident of the city and remembers when it happened.

"He Mali left that experience feeling negatively," Joshi told ABC7's Stephanie Sierra. "I don't want anyone that ever interacts with my officers to feel negatively."

As we reflect back on the murder of George Floyd, we've seen protests, calls to defund the police and cries for change.

"What will you change to ensure situations like that don't happen again?" Sierra asked.

"We want to look at how our scenes are supervised, how they are investigated after the use of force occurs and really be able to create an environment that allows us to self-assess and critique on every encounter when force has to be used."

The incoming chief also plans to update the department's use of force policies to prioritize de-escalation tactics. Once Joshi assumes office Monday, he will have eight days before presenting the department's recommended changes on use of force and mental health calls to city council on June 15.

Councilmember John Knox White told the I-Team there are no cuts proposed to the police department's budget, but that police salaries slightly increase, per a contractual agreement.

"There is additional funding that is also proposed that will go towards mental health work," White said.

According to the city, if the proposed budget passes, an additional $1 million annually would be added for mental health services across Alameda. City council will be deciding between expanding an existing paramedicine program that won't include police officers to be involved in responding to mental health calls or allowing qualified clinicians to assist police when responding to help evaluate the situation. Both options are expected to be up for a vote on June 15.
Report a correction or typo
Related topics:
alamedawrongful deathmurderpolice chiefpolice camerai teampolice officerpolice brutalitypolice
Copyright © 2022 KGO-TV. All Rights Reserved.
I-TEAM
Could remains in shrinking Lake Mead be tied to Chicago mob?
Oakland is target of most Bay Area freeway shootings, data shows
EXCLUSIVE: SF firefighter charged in other firefighter's beating
NorCal militia leader set to surrender for 6-month sentence
TOP STORIES
VTA holds memorial to remember victims 1 year after shooting
'Goodfellas' and 'Field of Dreams' actor Ray Liotta dies at 67
ABC7's new 24/7 live stream offers local news, weather
EXCLUSIVE: Brother of man killed in I-580 shooting hopes for justice
Vigil held for 19 children, 2 teachers killed in TX school shooting
Onlookers urged police to charge into TX school: 'Go in there!'
Warriors look to close out Mavs and get back to NBA Finals
Show More
Colin Kaepernick completes workout with Raiders, source says
Kevin Spacey charged in UK with 4 counts of sexual assault
CA congressman calls coach Kerr an 'ally' in fight for gun laws
Vigil held in Bay Area for TX shooting victims, calling for action
Gun, ammo found in 2nd grader's desk at NorCal school
More TOP STORIES News