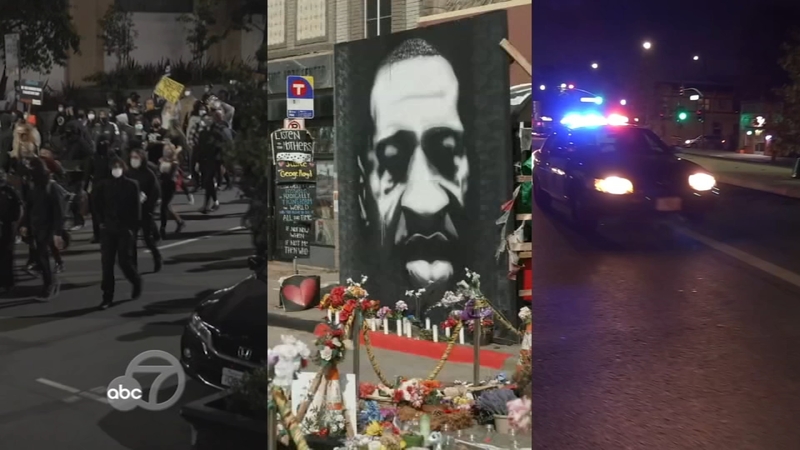 SAN FRANCISCO (KGO) -- As we reflect back on the murder of George Floyd a year ago, we've seen protests, calls to defund the police, promises for reform, and cries for change. But, what really has changed in the Bay Area?

WATCH: 'Our America: A Year of Activism': How activism has evolved since the murder of George Floyd

"He repeatedly said I can't breathe and he called for his mother," said Cat Brooks, shaking in fear watching the footage.

"There are so many cases, it breaks my heart."

Remembering the lives lost in the last year

The day before on April 19, 26-year-old Mario Gonzalez was killed after being pinned to the ground by Alameda police officers.

A year ago in Alameda, 44-year-old Mali Watkins arrested and pinned to the ground for "dancing in the street."

Brooks says the latest cases out of Alameda, involving Gonzalez and the arrest of Mali Watkins for "dancing in the street" last year, are exactly why police shouldn't respond to mental health calls.

"Stop calling the police on each other, please, I'm begging you," Brooks said. "They don't make it better."

In the last year, the city of Alameda has established a committee dedicated to strengthening police oversight, updating use of force policies, and looking into how to better respond to mental health calls.

Stephanie: "Last year, former Police Chief Paul Rolleri mentioned police shouldn't be responding to mental health calls. Where does that stand now?"
Eric: "What we're looking at doing and what the council's focus is to try have mental health response be police second and to have an initial responder that may be different than just police. That's one thing we're looking at."

"We've been saying these things for a while, I think everything that's happened in the past year now everybody else is saying it," Scott said. "We're supportive of it, there are some things police officers are just not cut out to do."

Chief Scott says SFPD won't respond to mental health calls alone. But, if there's a threat of violence, officers may be involved but made it clear, mental health clinicians should always be present during those situations.

"We call our clinicians to crisis situations particularly standoffs and things like that," said Scott.

Brooks isn't convinced that will work.

"Look if any police officer on this planet or in the country is using any use of force as retribution for what happened in Minneapolis, I think that's twisted," Chief Scott responded. "If it happens here we'll call it out."

In Oakland, the city is implementing a pilot program this fall called the Mobile Assistance Community Responders of Oakland or MACRO. It will operate under the fire department, but the teams will be made up of trained social workers or psychologists that will respond to mental health calls instead of police.

"The majority of folks around the country do not want cops responding to mental health calls," Brooks said.

In San Jose, the police department created a Mobile Crisis Response Team (MCRT) that connects officers and qualified clinicians to respond to mental health calls. The program is now mandated protocol within the department.

As for San Francisco, reform measures started being implemented back in 2016 with changes to their use of force policy.

"We abolished the chokehold, and prohibited shooting at moving vehicles, among many other things," said Scott. "That our city took the lead on in my opinion."

In the last year, the department has stopped releasing booking photos.

"When you constantly see booking photos, your mind, you start associating people with crime," he said. "So we abolished that."

But, as the chief pointed out, these changes are just small steps in the short term, real reform will take time.