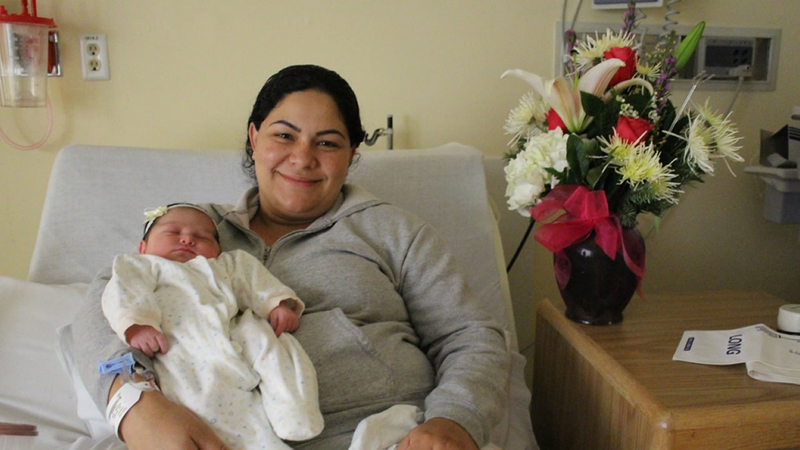 Woman gives birth after being stuck in protest traffic

BERKELEY, Calif. (KGO) -- A San Francisco woman is counting her blessings. She was stuck in Monday night's horrible traffic on I-80 after protesters blocked the freeway for hours. However, unlike everyone else stuck in traffic, her situation was more than just an inconvenience -- she was having a baby right then and there.

She's tired but in great spirits. ABC7 News spoke with her by phone while she recovers at Alta Bates Medical Center in Berkeley. She arrived there just in time.

Adriana Torres took a picture holding her newborn daughter, Camila, on Tuesday after quite an ordeal the night before. Torres was driving home to San Francisco from Rodeo when traffic came to a standstill. Protesters blocked I-80 for hours when something unexpected happened.

The 29-year-old mother said, "I had contractions every three to five minutes. When I [had a lot of] pain, very strong, I called 911. Come and help me!"

But getting an ambulance to Torres in the sea of cars would be nearly impossible, until a firefighter in an SUV heard the call and intervened.

Berkeley Fire Dep. Chief Gil Dong said, "One of our battalion chiefs used his red lights and sirens, went through the opposite traffic to find the patient."

Assistant Chief Abraham Roman got to Torres in just 15 minutes. SKY7HD was there as she was transferred into an awaiting ambulance away from the protesters and the freeway.

"I [was] nervous only because I thought, 'Oh my God, maybe a delivery in the car?'" Torres said.

Roman stayed with Torres until she got the hospital. Camilla was born just four hours later.

Jamie Ortiz is Torres' husband. He says what happened Monday night was very, very dangerous for a lot of people. Blocking the freeway created havoc. He says he'll feel better once his daughter is safely at home on Wednesday.

Eight-pound Camilla was born around 2 a.m. Tuesday. Torres also has a 2-year-old son.