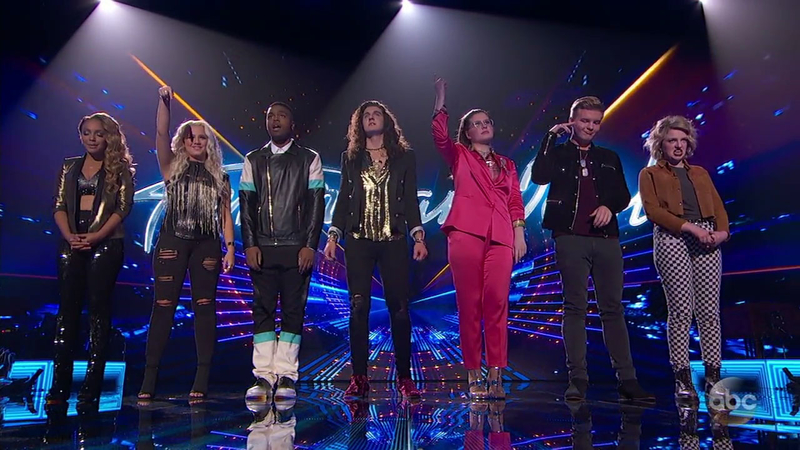 LOS ANGELES -- The "American Idol" top seven will each perform twice for this round of competition.

One song will come from the year they were born.

The contestants all started the show with giant pictures of themselves as babies. And yes, most of these finalists are very young.

Nick Jonas served as mentor for those rehearsals. They also opened up the songbook of Prince, and Sheila E. is along to help out with the band.

Good news for fans of this Top 7: host Ryan Seacrest announced they will be going out on tour together this summer.

Here's what the judges had to say about each of the performances:

Jurnee - "Kiss" by Prince
Praise all around. Lionel Richie references how much Jurnee reminds him of Sheila E. from back in the day; Katy Perry liked that she moved around the stage a bit but would like to see her do it even more; Luke Bryan liked her song choice and liked the fact she got the audience moving.

Gabby Barrett - "I Hope You Dance" by Lee Ann Womack, 2000
Gabby has a pretty soulful meeting with Nick. They share that they both grew up singing in the church and Jonas advises her to build on that foundation. He also tells her to lean into the song more, as a storyteller. Perry thought this song was a break-out for Gabby; Bryan said this was one of the best vocals he's heard so far in all of the competition; and Richie complimented Gabby for looking so comfortable on the stage.

Michael J. Woodard - "I Would Die 4 U" by Prince
Again, praise all around. Both Bryan and Richie think Michael needs to relax a bit more on stage. He's having fun, and that shows, but they'd like him to be a little freer. Perry thought he had a natural interaction with the audience, and with Sheila E, who then offered her own kudos to Michael and said he "sang his butt off."

Cade Foehner - "Who Will Save Your Soul" by Jewel, 1996
It looks like Jonas is intrigued with Cade. In their conversation, Nick encourages him to not just change the song arrangement musically but to find a connection with the song. Richie told Cade he was proud of him and thinks he pushes the envelope every time; Perry called his rendition "interesting", and told Cade not to always go full throttle with his songs; it's OK to build. She also joked that her mom was in the house and probably on the phone voting for Cade right then and there.

Catie Turner - "Oops... I Did It Again" by Britney Spears, 2000
It really wasn't a surprise that Catie freaked out at meeting Nick Jonas. She's loved him since she was five. She has to close her eyes at first in order to sing with him in the room. He pushes her, and she relents and actually starts performing and utilizing his help. Perry again used the word "interesting" to describe Catie's interpretation of Britney's iconic song, and said Turner is unlike anyone else. Both Bryan and Richie want Catie to start believing in herself more. Lionel thinks Catie has it in her head that she's not "there," but she is.

Caleb Lee Hutchinson - "Amazed" by Lonestar, 1999
He adorably tells Nick he has trouble walking and singing at the same time. Jonas gets it, and works with him on what can seem unnatural but gave him tips on how to make it look easy. Bryan told Caleb it's gutsy to admit when you are uncomfortable with something and it's admirable to ask for help. Richie reminded him that it's not just the singing, and moving, and performing, it's also the throng of screaming girls in the audience that could be throwing him off. Lionel advised Caleb to just be himself, and do what comes naturally. Perry praised him for showing us something different, but also alluded to his movements as "flopping like a Gumby."

Maddie Poppe - "Nothing Compares 2U", written by Prince
She accompanied herself on the piano and Richie applauded Maddie for doing so, and reminding us of her versatility. He also called her vocal amazing. Perry said that whether Maddie wins or not, she's buying tickets to her tour. Bryan was pretty much speechless, but did manage to say Maddie was mesmerizing.

Michael J. Woodard - "My Heart Will Go On," by Celine Dion, 1997
He admitted to Nick Jonas that he hadn't seen "Titanic," but he knew this was a big song. Jonas offers some advice about Michael not having walls up and letting people, and feelings, in, even if you don't know the outcome of a situation. Perry told him that she feels the sky is the limit for Michael, and she sees a Jennifer Hudson-type future for him. Bryan said Michael has a God-given talent that lets him draw people in; Richie agreed that his stage presence is off the charts.

Cade Foehner - "Jungle Love" written by Prince
The song, made famous by Morris Day and the Time, allowed Cade to show off his massive guitar skills, as well as his vocals. Bryan and Richie love how Cade shows off his style and identity; yes, it was a Prince song but he made it all Cade. All Perry can do is fan herself, scream, and then admitted "I could be your babysitter!"

Gabby Barrett - "How Come U Don't Call Me Anymore" by Prince
A very blues-driven Gabby shows up for this rendition and it's unlike anything she's done. The judges are blown away. Bryan called it a "mic drop moment". Richie said that the song was the perfect example of "ownership". Perry thinks Gabby is the one who is most ready to go out on tour and that a career is hers for the taking.


Jurnee - "Back at One" by Brian McKnight, 1999
It's her parents' wedding song so there's special meaning here. Jonas was very taken with her voice, and said while he's not supposed to pick favorites, he does see something in Jurnee. The judges weren't wowed by her live performance, though. Perry said this is a song that is all about feeling and Jurnee didn't give her the feels this time; Richie reminded her she's already a winner because she'll soon be going out on tour with this group.

Catie Turner - "Manic Monday" written by Prince
Catie started the song... and forgot the lyrics. She shrugged, listened to the music, and then picked it up. It was a solid recovery. Bryan reminded Catie that was her first glitch and it happens to all of them. Richie said in this business things are not perfect, go with it, and move on. Perry said if you fumble the ball pick it up and keep going, no one will care, or remember.

Maddie Poppe - "If It Makes You Happy" by Sheryl Crow, 1997
Maddie gets a heart-to-heart talk from Nick about not selling herself short; he said it's OK to want to be more, and it's OK to fail, just show off all you've got. Maddie played electric guitar with her song this time around. Richie thinks she's a powerful force; Bryan thanked her for showing so many sides to her talent; and Perry said Maddie held her own and is a true artist.

Caleb Lee Hutchinson - "When Doves Cry" by Prince
Caleb strapped on his guitar and performed a "country-fied" version of one of Prince's most iconic ballads. The judges didn't say much, but that could have been more of a time issue. They were all proud of Caleb's journey, and believe in his talent.

Seacrest had to zip through the results in order to make it off the air in time.

That means we said goodbye to Jurnee and Catie.