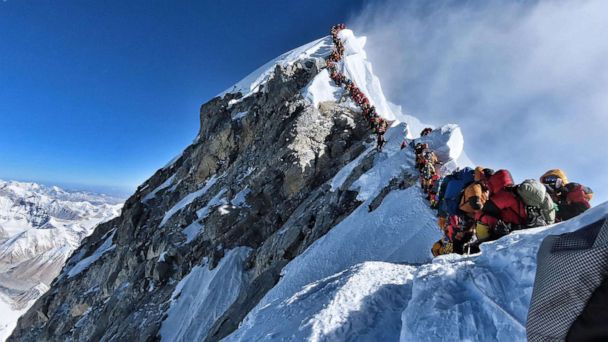 An American man who conquered the Seven Summits -- the tallest mountains on each continent -- died on Mount Everest shortly after reaching the peak.

Sherpa guides brought Cash down from the 8,848-meter peak to Hillary Step, a landmark on the mountain located at about 8,770 meters, after administering CPR, raising Cash's oxygen pressure and giving him a massage. Ultimately, though, they were unable to save him, the company wrote.

Tackling Everest was the culmination of years of training and dreaming.

"This is a total blast," Cash wrote from the mountain in April in a post on Instagram. "I'm truly blessed to just be here on this adventure with great new friends!!"

Cash's body was left on the mountain, Gyanendra Shrestha, the government liaison officer at base camp told ABC News, but there will be more recovery efforts Thursday, weather permitting.

"The last message he sent to me, he said, 'I feel so blessed to be on the mountain that I read about for the last 40 years,'" his son, Tanner Cash, told KSL-TV, an NBC affiliate.

Another climber, Anjali Kulkarni, from India, also died while descending from the Everest peak on Wednesday, the South China Morning Post reported.

Weather conditions on the mountain this season had many climbers waiting for a clear window. When one presented itself this week, climbers on the north and south side of the mountain attempted to take advantage of it.

Nepal has granted 367 permissions to foreign climbers on Everest and 14 to Nepalese climbers, according to Shrestha, and there are over 400 additional Nepalese support staff on the mountain.

The peak was crowded on Wednesday, and South China Morning Post reported the crowds caused lines and delays near the summit. There were reports of two- to three-hour waits to descend by the Hillary Step on Wednesday, Everest expert Alan Arnette wrote on his blog. The spot is named for Sir Edmund Hillary, who, along with Tenzing Norgay, was the first person known to reach the peak.

The longer a person stays at high altitude, the higher the risk of altitude sickness.

Altitude sickness happens when the body struggles to adapt to lower air pressure and oxygen levels, and symptoms include dizziness, vomiting and weakness, with emergency cases including fluid in the lungs and brain. The recommended response is for a person to move to move to a lower-elevation area.

There have been 12 confirmed deaths this climbing season in the Himalayan region, according to Shrestha, including three on Everest. Indian climber Ravi Thakar died during his Everest descent last week.

Pioneer Adventure did not respond to ABC News' request for comment.

"He wanted to do this," Brandalin Cash, Cash's daughter, told KSL-TV. "He wanted to be on that mountain. He wanted to show that he could accomplish dreams and that others can too."