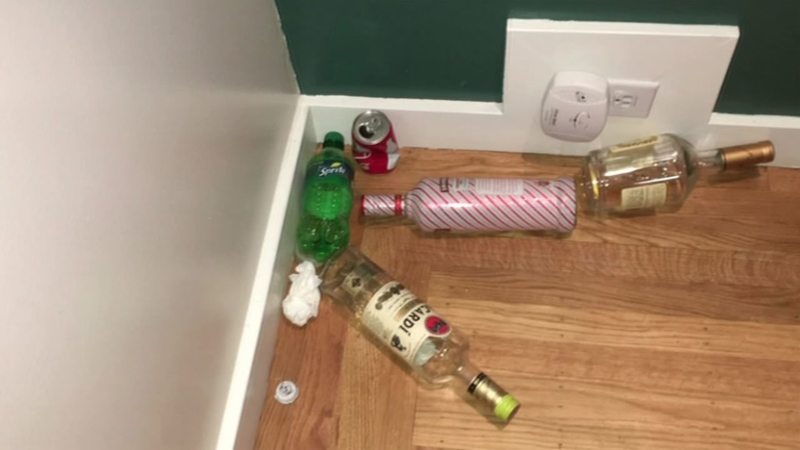 OAKLAND, Calif. (KGO) -- Some East Bay homeowners are feeling duped after renting out their home on Airbnb over New Year's Eve.

The so-called guest wound up being a teenager who threw a huge party.

"If it had gone on for two to three more hours, who knows, could have burned down the house," a neighbor said.

The house on Santa Clara Avenue in Oakland is Reshma Vasanwala's pride and joy. "Tons of booze, broken glass, cigarettes," she said, walking through her trashed home.

Vasanwala rented her home on Airbnb to what she thought was an older man from Chicago for New Year's Eve.

It really went to a teenager who threw a rager for his 18th birthday. There were 200 kids all over the house and they wrecked it.

"I think people were stepping or jumping on them," Vasanwala said of her white chairs.

A neighbor, who didn't want to be identified, called Vasanwala, who was out of town, to tell her about the party in her house.

"I was real concerned. I saw young people shouting back and forth," the neighbor said.

By the time Vasanwala and her partner got home, the kids had cleared out. She called the renter, who actually returned.

Police arrested him on the spot for vandalism, but the problems aren't over.

The couple has had to call police several times because teenagers just keep showing up here. A lot of them left the party so quickly that night that they left personal items behind.

"Audacity was beyond me. Like really, you've done this to our home and you're concerned we're not giving you your sweat jacket right away," Vasanwala's partner, Jim Santi Owen, said.

While the couple admits they should have screened more, Airbnb issued a statement saying, "We have banned this guest from Airbnb and our trust and safety team has reached out to the host to work with them under our $1 million host guarantee."

Travel advisor Edward Hasbrouck thinks this should be a wake-up call for Airbnb hosts. "Hosts need to think more seriously in general when thinking about what risk they are taking when getting involved."