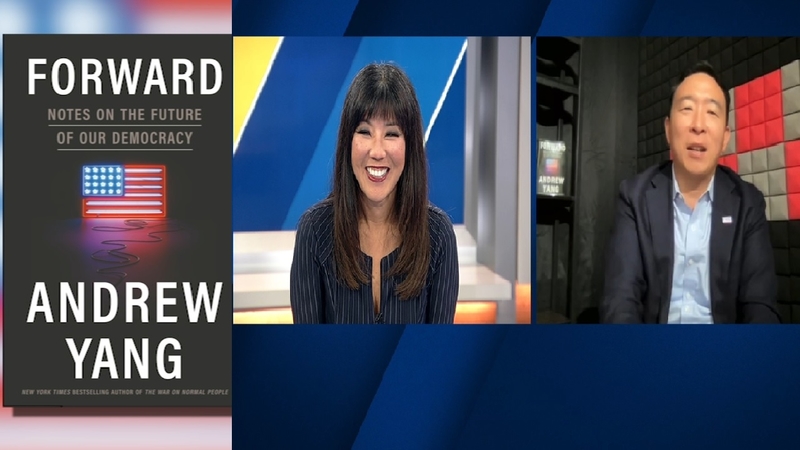 NEW YORK (KGO) -- 2020 Democratic presidential candidate Andrew Yang is coming to San Francisco's Cobb's Comedy Club on Saturday, October 23 to sign and discuss his new book, Forward: Notes on the Future of Our Democracy. It details lessons he learned through his presidential and New York mayoral campaigns, and spells out the platform of a new political party he launched this month, the Forward Party. Yang spoke with ABC7 News anchor Kristen Sze on our 3PM program Getting Answers ahead of his Bay Area visit, which was originally scheduled for Oct. 21, until his flight was cancelled.

He says refunds will be given to anyone who can't make it to the re-scheduled event:

San Francisco! My flight from LA got canceled due to inclement weather/tech failure. Frustrating. We are rescheduling to Saturday at 4 pm! Refunds and love to all who can’t make it then. Thank you and see you soon!! 😀🙏❤️

When he joined our program, Yang said it's time for a middle-ground, common sense viable third party that represents the majority of Americans. He believes our current system and election process are producing more partisan candidates and widening our political polarization.

"The only way we're going to get the polarization under control is if we change up the two-party dynamic that right now is leading to dysfunction and clashes. Eventually it's going to lead to unrest, and even conflict and violence. So my goal now as the founder of the Forward Party is to present a new way forward that'll actually enable different points of view to emerge, and make it so it's not a zero sum game anymore."

The Forward Party advocates for open primaries and ranked-choice voting as solutions. Yang points out that Congressional members are re-elected at a 92% rate despite consistently low approval ratings for the legislative body. He cites the growth of "safe" districts as a problem. 83% of districts are currently very red or very blue, and members' job security "is centered around trying to please the most partisan voters in their district and their community... To win a ranked-choice voting election, I need to be on it 50.1% people's ballots. If I cater to the extreme, I'm probably going to turn off someone else. It should diminish negative campaigning and make coalition-building more of a norm." Yang praises California for having open primaries, as well as the use of ranked-choice voting in some of our elections, including Bay Area mayoral races.

In addition to election reform, Yang's Forward Party advocates for "human-centered capitalism," built around enacting a federal Universal Basic Income. Giving every American adult $1,000 a month was Yang's main issue as a presidential candidate, and he continues to believe that is one way to include everyone in an increasingly automated, high-tech economy. Yang says the current employment-related benefits incentivize Americans to not work, since working would reduce or remove those benefits.

The Forward Party is current a political action committee, but it's seeking Federal Election Commission recognition as an official political party. Yang says the Forward party will support candidates aligned with the platform whether they are currently Republican or Democrat, hoping to eventually run candidates under the Forward banner. He says his not worried about playing spoiler, as in siphoning off votes from one dominant party and handing the victory to the other dominant party. That is a traditional argument against third parties, and usually works against Democrats. But Yang says ranked-choice voting would mitigate that problem, and allow multiple parties to develop and thrive in the U.S., like in some European countries.

To make structural changes, we need pro reform leaders in place. That’s why initially #ForwardParty will support candidates running as Dems, Reps, Independents, and any other party that support our goals, starting w/ #OpenPrimaries & #RankedChoiceVoting https://t.co/iuFVa9nA6w

Watch the full interview in the video player above