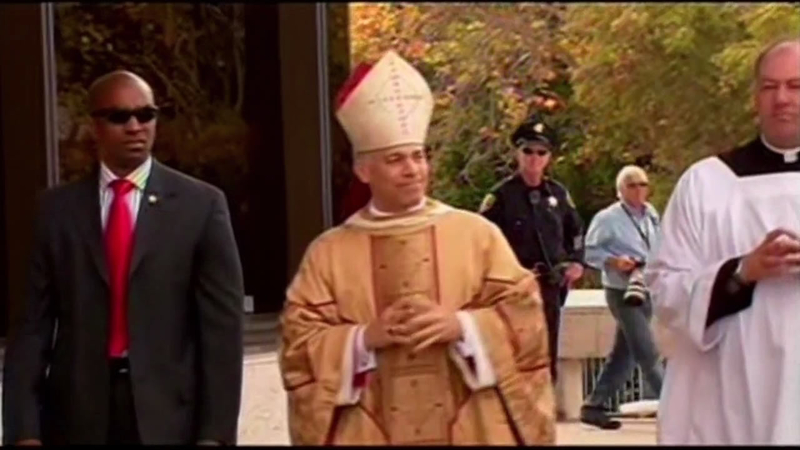 SAN FRANCISCO (KGO) -- San Francisco's Archbishop Salvatore Cordileone is refusing to budge and is standing firm on his plan to attend a controversial pro-marriage march in Washington D.C. on Thursday.

An array of lawmakers and supporters of same-sex marriages have asked Cordileone not to attend. On Tuesday, a few protesters marched to the Archdiocese of San Francisco to try to get his attention, but were locked out.

"The archbishop certainly has the right to his beliefs and the right to express them, but unfortunately the June 19 event is being organized by some of the most extreme anti-LGBT organizations and leaders," Dignity USA spokesperson Bill Baird said.

"We want to bring people together not divide people," one man said.

But the small group was locked out of the building. The Archdiocese of San Francisco told ABC7 News it was only following protocol by locking the building when an unscheduled demonstration is held outside.

"Shame on the Catholic Church," one person said.

But the demonstrators found a gap in between the front door and tossed every single petition that had been signed.

A spokesperson for the Archdiocese of San Francisco eventually came outside to explain why Archbishop Cordileone was attending Thursday's march.

"Marriage is between a man and a woman, that is the Catholic Church's platform," San Francisco's Archdiocese spokesperson Christine Mugridge said.

Cordileone will reaffirm that belief before thousands of people in Washington D.C. despite multiple requests from lawmakers and San Francisco city officials to not attend.