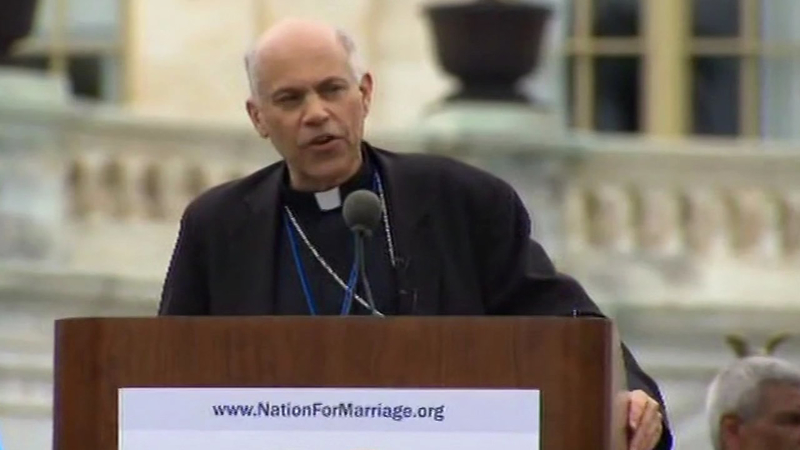 SAN FRANCISCO (KGO) -- San Francisco's archbishop spoke to the "March for Marriage" crowd in Washington, DC. crowd Thursday morning, a move that was highly protested by same-sex marriage supporters in the Bay Area.

Archbishop Salvatore Cordileone spoke for about ten minutes. His theme was love and truth. He told the crowd that they need to have love for all people. But as far as the Catholic Church is concerned, the truth is that marriage only exists between and man and a woman.

It was a moment Bay Area activists hoped would never happen -- Archbishop Cordileone taking the podium at the March for Marriage event in Washington DC.

"We are here today to march for marriage," he said. "To pick up the torch and pass on to a new generation the truth about marriage."

The truth, according to the Catholic Church.

"The truth is that every child comes from a mother and a father and to deliberately deprive a child of knowing and being loved by his or her mother and father is an outright injustice," said the archbishop to a round of applause.

Earlier this week, supporters of same-sex marriage marched to the Catholic Archdiocese in San Francisco while armed with the signatures of 30,000 people who did not want the archbishop to attend the event in DC.

"The archbishop certainly has the right to his beliefs and the right to express them, but unfortunately the June 19 event is being organized by some of the most extreme anti-LGBT organizations and leaders," said Bill Baird with the group Dignity USA.

The group ended up sliding the signatures through a gap in a locked door. A spokeswoman says the doors are always locked in the event of an unscheduled demonstration.

The archbishop was undeterred, and took his place among dozens of anti-gay marriage speakers in the nation's capital.

"We must recognize, yes there are people on the other side of this debate who are of goodwill and are sincerely trying to promote what they think is right and fair," said Archbishop Cordileone. "Granted, it is misdirected good will."