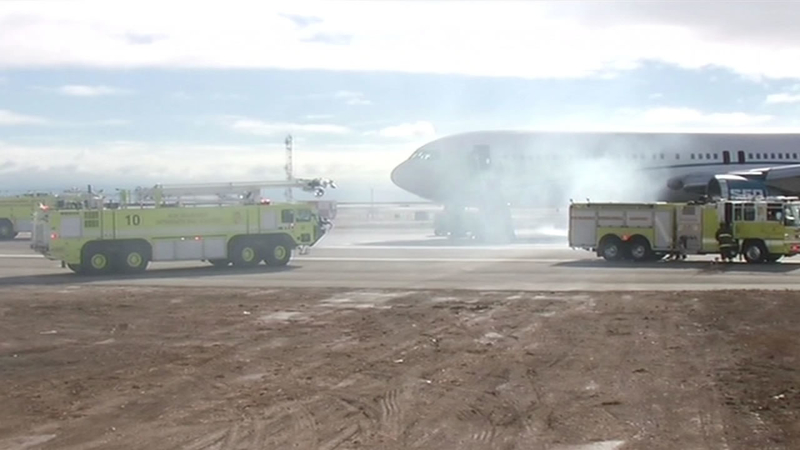 MILLBRAE, Calif. (KGO) -- A mock plane crash scenario was playing out at the San Francisco International Airport in the first test of its new emergency response procedures that were put in place after last year's Asiana airplane crash.

The scene for Wednesday's drill has been set: An emergency announcement was made that a plane crash landed at the airport. Thick plumes of smoke poured from the plane. The number of passengers onboard and the severity of their injuries were unknown.

More than 300 volunteers played the role of passengers aboard the Boeing 767. Michael Cordova was one of them. He said he's volunteered so SFO knows what they're dealing with if a similar situation occurred.

This was a full-scale emergency exercise designed to be as realistic as possible.

Officials at SFO know firsthand how quickly the emergency call can go out and how responding in seconds can save lives.

Emergency procedures were front and center after first-responders were called to assist passengers of Asiana Flight 214 that crash-landed at SFO on July 6, 2014. After an investigation by the National Transportation Safety Board, recommendations were made on ways to improve emergency response.

"Not only do we want to practice our normal procedures, we learned some lessons last year during the Asiana accident. We continue to make enhancements," Yakel said.

Many of those enhancements were tested Wednesday for the first time, such as a common radio frequency shared among first responders so they can talk to one another. There is also a new emergency notification system and lastly, they've added a full-bodied 767, one of the more common-sized planes used today to add to the realism.