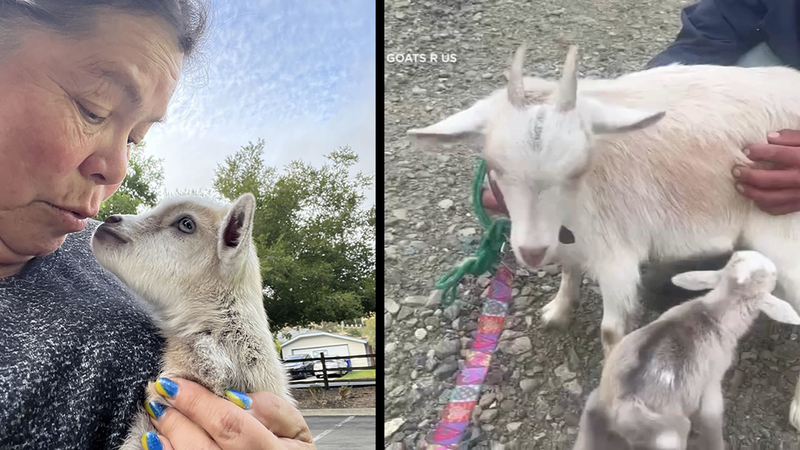 PINOLE, Calif. (KGO) -- A newborn goat whose kidnapping was caught on camera in Pinole was found safe by neighbors and returned to its mother, who the owner says was noticeably sad and confused over her baby's disappearance.

The kidnapping happened where the goats were eating grass for fire protection.

This is a breaking news update. See our previous report below.

There were 700 goats clearing the weeds in El Sobrante but the littlest one in the herd is missing. Goats R Us owner Terri Oyarzun isn't the only one heartbroken... its mom is, too.

"The mom is missing it, wondering what happened," she said.

Terri Oyarzun says the newborn goat was taken from its mom and herd on Friday when it was grazing in a Pinole neighborhood, the alleged theft was captured on Dom Erfe's home security camera.

A person is seen snatching the baby goat and walks off with it, leaving its mother watching on the hillside, they cross the street getting into a grey sedan, possibly a Ford Focus and driving off seconds later. The goat-napping, a possible holiday prank.

"My thought is someone thought this was a wonderful Easter idea, I'm really sad someone would do that," said Oyarzun.

A herder and watchdog did not witness the goat being stolen, the newborn kid now in need of its mother's milk.

"As time ticks on, the separation between the mom and baby gets larger, it's pathetic." Oyarzun added.
Dom Erfe says taking a baby goat is beyond belief.

"If I saw something escape from fence put it back, it's not yours," said Erfe.

Pinole Police are investigating the goat-napping, they say no leads so far.

Terri says these goats are more than weed-eating tools, they're family and she has a message for whoever grabbed hers.

"My message is do the right thing, give back our goat."