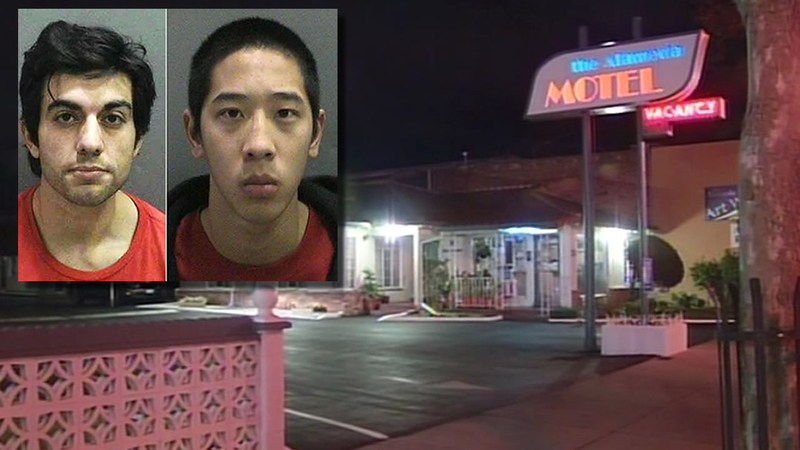 SAN JOSE, Calif. -- The first major break in the hunt for three dangerous jail inmates came exactly a week after their escape, when one of them walked up to a Southern California auto shop where a friend works, had her call police and stood and smoked a cigarette until he was arrested.

He then told investigators that a day earlier he had been in Northern California with the other two inmates before breaking off to turn himself in, setting off a statewide search, authorities said.

Bac Duong, 43, is in custody and cooperating with authorities, Orange County sheriff's spokesman Jeff Hallock said Friday. His two former companions, 20-year-old Jonathan Tieu and 37-year-old Hossein Nayeri, are believed to be in San Jose and driving a van that the men stole a day after their escape. They may be on their way to Fresno, Hallock said.

Duong, Tieu and Nayeri broke out of the Santa Ana jail last Friday using an elaborate plan that involved cutting through steel bars and plumbing tunnels and rappelling down the jail's roof using folded up bed sheets.

Eyewitness News got an exclusive look at the planned escape route taken by three inmates who broke out from the Orange County Central Men's Jail.

"If they are watching, we want them to understand that we are pressing forward, and we are coming after them," Hallock said at a news conference, addressing the escapees directly for the first time. "We will take you back into custody."

Duong was taken into custody in Santa Ana, where the trio made their brazen escape on Jan. 22 from the maximum security facility, authorities said.

It's not clear how he got back to Southern California from San Jose, but early Friday Duong contacted a woman he knew at the auto electric repair shop just a few miles away from the jail, authorities and witnesses said.

Lee Tran, whose family owns Auto Electric Rebuilders, said Duong came to the shop looking for Tran's sister, Theresa, and told her that he wanted to surrender.

"He was scared for his life, pretty much," Tran said. "That's why he asked one of our people to turn him in."

Tran said his sister called 911, and Duong stayed outside until authorities came.

"She was crying her head off," said Trach Tran, her father, who was also there. "Everybody was scared."

Lee Tran said his sister's boyfriend knows Duong, and federal authorities had come by to speak with her earlier this week because she might have visited Duong in jail.

Tieu and Nayeri are believed to be still together in a white utility van the fugitives stole a day after the escape, and they could be headed to Fresno where there may be an associate who can help them, Hallock said.

The three men had all been awaiting trial for separate violent crimes at the Central Men's Jail. They were held in a dormitory with about 65 other men in the jail about 30 miles southeast of Los Angeles.

The men escaped in the early morning hours after cutting a hole in a metal grate then crawling through plumbing tunnels and onto the roof of a four-story jail building.

They pushed aside barbed wire and rappelled down using a rope made of bed linen.

On Thursday, authorities arrested a woman who taught English inside the jail. Nooshafarin Ravaghi, 44, gave Nayeri a paper copy of a Google Earth map that showed an aerial view of the entire jail compound, Hallock said.

She was booked on suspicion of being an accessory to a felony and was being held pending a court appearance set for Monday. It wasn't clear if she had a lawyer.

Duong, a native of Vietnam, has been held since last month on charges of attempted murder and assault with a deadly weapon.

Tieu is charged with murder and attempted murder in a 2011 gang shooting. Nayeri had been held without bond since September 2014 on charges of kidnapping, torture, aggravated mayhem and burglary.