The congestion was caused by a fiery crash that blocked three lanes of traffic.
KGO
By Amy Hollyfield 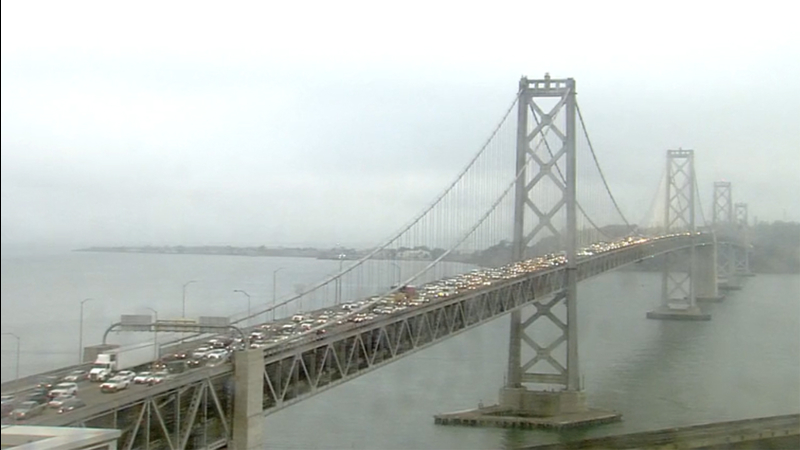 SAN FRANCISCO (KGO) -- A crash on the Bay Bridge in San Francisco Tuesday morning created a back-up that looked like pre-pandemic traffic. It was proof of what many drivers have suspected: more people are out on the freeway during the commute than at the beginning of the shutdown.

"The fact that the back up on the Bay Bridge and the Bay Bridge approaches was as long as it was today is a function of the steadily increasing traffic all around the Bay Area," said John Goodwin of the Metropolitan Transportation Commission. He said he, too, was stuck in the backup.

The congestion was caused by a fiery crash that blocked three lanes of traffic.

Bay Area roads may seem busier these days, but over all traffic is still at about 80 percent of normal since the start of the COVID-19 pandemic.

"About 6:10 am there was multi vehicle collision on westbound 80 just west of the Fremont off ramp. As a result of the collision, which was determined to be a chain reaction collision, one of the vehicles caught fire," said CHP Officer Mark Andrews.

Some drivers said it took up to an hour and a half to cross the bridge.

"The lanes were blocked for just over an hour and at that location the freeway actually narrows coming off the Bay Bridge to four lanes," Officer Andrews said.

"A couple of involved parties were taken to the hospital but it doesn't sound like it was too serious," he said.

Numbers from the MTC confirm that more people are crossing the bridge now than at the beginning of the shelter in place order.

But down in Silicon Valley, officials say it appears a lot of people are still working from home.

"Traffic is still significantly lower than it was a year ago on the Dumbarton and San Mateo/Hayward Bridges," Goodwin said.

He says if you are planning to start commuting again, you should get a Fastrak pass to help avoid a delay at the toll booth.

#UPDATE: ALL lanes are open! Traffic is recovering, but it will still take you a LONG time to get through the toll plaza and across the bridge. https://t.co/ScIkF8qUlz pic.twitter.com/PP92CUdU5Q

#HappeningNow a Sig Alert has been issued on the Bay Bridge near the Fremont Street off-ramp. A crash has led to a car fire. The CHP says 2 lanes are blocked. Expect delays. More: https://t.co/mHxj8wa5LD pic.twitter.com/0cohMkSbfu