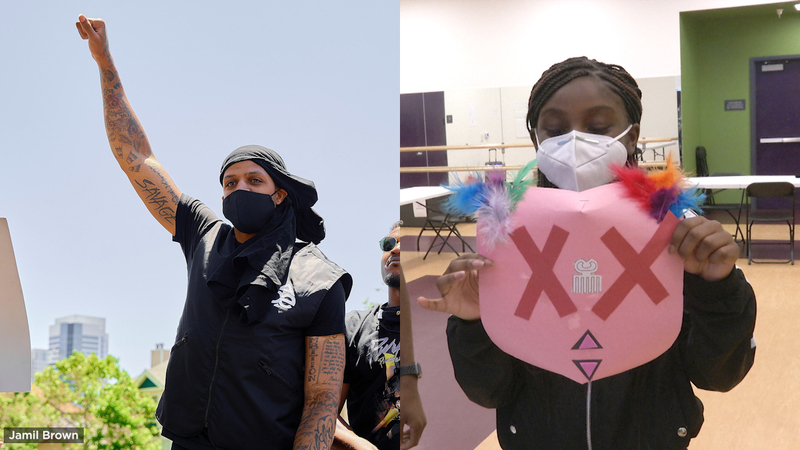 OAKLAND, Calif. (KGO) -- When thousands of people marched to Lake Merritt last month to protest police brutality, most of the attention was focused on Klay Thompson and Steph Curry in the crowd.

But the march was organized by another Golden State Warrior, Juan Toscano Anderson.

Regina Jackson was one of the marchers and she was beaming with pride.

"It is one of those parenting moments when you realize they were listening. Wow, they got it," said Jackson, president of the East Oakland Youth Development Center.

Toscano-Anderson is a former student who grew up just ten blocks from the center on International Boulevard and 83rd Avenue.

Another of the march organizers, Jamil Brown, started going to the center when he was in the 4th grade.

"Over the years, I was constantly there playing basketball and just stopping by to check in on all my friends," said Brown, who went to Oakland High School and played basketball against Toscano-Anderson.

"Say her name."@juanonjuan10 leads his Walking in Unity event in Oakland. pic.twitter.com/7l0EjSwOt5

"A lot of the friends I made there, we are still close to each other. The main thing they taught me there was a sense of community and a sense of family," said Brown, who is a disk jockey now.

Marches are nothing new to kids who attend the center. Since 2002, the EOYDC has held marches every year against gun violence in its community.

"Marching teaches them about everything. It is very important to be seen, so part of that is learning to advocate for yourself," said Jackson. "Our focus is to really develop the social leadership capacity of young people."

The center's mission has been tested with the stay-at-home order. On March 7, it had organized a march through the neighborhood. The kids walked alongside Thompson and Warriors head coach Steve Kerr.

A week later, the center had to close with other non-essential businesses.

"It was like our hearts were ripped out," said Jackson. The center began distributing food to families, but switching to virtual learning proved challenging. Many of the families in East Oakland live in impoverished conditions. Some do not have computers or fast internet service.

"Some families had to come and get crayons," said Jackson, who explained that the center distributed activity kits as a way to stay connected with kids in the area.

The center was finally able to reopen on June 29 for the start of its summer camp. Fewer students can attend because social distancing guidelines limit the number of students in a classroom. Reimagining its program has been extremely difficult.

"We are the place that gives the kids so many first time experiences. Young people need to have places to be where they can be safe, where they can have vision and dream," said Jackson.

Besides educating kids and teaching them about careers, arts and wellness, the students are also learning about Black history and African culture.

"The center teaches you things you don't learn at school. You learn about the history of your skin color," said Jedah-Simone Simon, a high school senior who first started coming to the center when she was seven. She is now a science instructor. '

"Growing up as an African-American female, the school books don't touch on that. The EOYDC has taught me not to hold yourself down because of skin tone or gender," said Simon.

Milan Drake first came to the center when he was five. He came back after his freshman year at CSU Northridge to be a summer youth coach.

"It is very important to be in touch with your roots, especially African American," said Drake, who was helping younger kids make African tribal masks. "It is good to show the kids that not everything in history has a negative light on the people that you look like."

Jackson considers the EYODC is a historic treasure with an impact that goes beyond just educating kids.

"We are only 41 years old, but there are at least three generations that can point to this place and say it saved my life."

RIP Pops .. I watched you teach , spread knowledge and lead by example my whole life.. its my duty to do the same. pic.twitter.com/NEhtAFBDC2