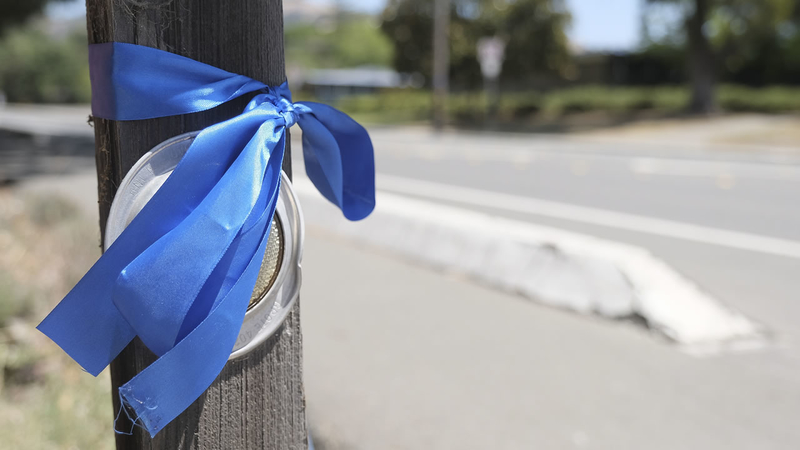 SANTA ROSA, Calif. (KGO) -- In the North Bay it has become a subtle but growing movement, blue ribbons along streets and avenues.

They're being put up by people like Lisa Landrus of Santa Rosa. She wanted to express her thanks to local police. Since George Floyd and before, men and women in blue have been under severe pressure and scrutiny.

RELATED: 'We Back Blue': Hundreds rally in Napa to support law enforcement

"I am saying I support. I pay tribute to them,"

Lisa began her personal project two days ago, with 150 ribbons in a six-block area near her home. She felt good about making a statement. But the next morning, when she woke up, Lisa noticed that someone had taken them down.

"This was a concerted effort to silence the message I want to send and my friends want to send."

Across town, Jeff Wandell took us for a ride to count the blue ribbons he has put up near his home. Many of them have disappeared, as well. And it's too broad a brush, he says, especially in Santa Rosa.

"These are not the four men from Minnesota by any stretch of the imagination," he said.

At its core, all of this, putting up and tearing down, is about free speech, but using actions instead of words---and none of it face-to-face.

"I am more indignant. I am more determined," said Lisa. "We will not be undone. I am not angry about free speech. I'm angry when people don't use it appropriately and it affects the community negatively."

And so, this is an unusual form or debate. It began with a notorious act in another state. Now, we see silent blue ribbons, waving in the face of a powerful movement.

"Let's be honest," said Jeff Wandell. "It is awesome that we marched. We need to change. All of us have messed this up. It's up to us to fix it."