The 39-year-old is charged with attempted murder after shooting at a man accused of molesting one of his relatives in March.
KGO
By Dustin Dorsey 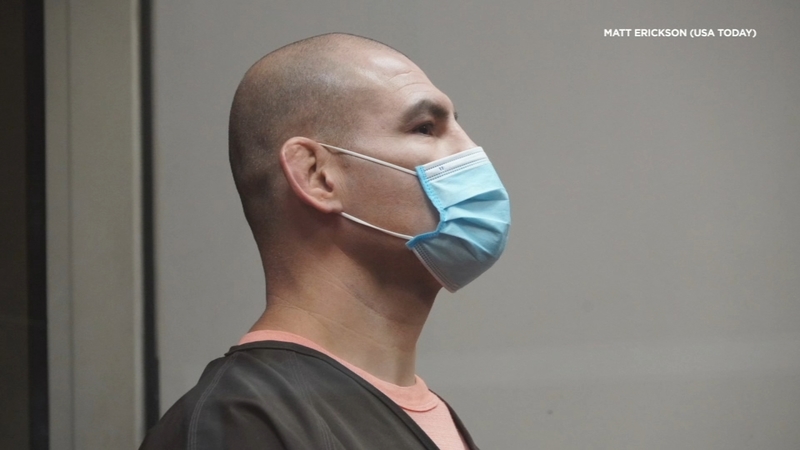 Cain Velasquez thanks fans for support in 1st statement since arrest

SAN FRANCISCO (KGO) -- The court adjourned quickly in the case of former UFC champion Cain Velasquez on Tuesday. He was expected to enter a plea in a San Jose courtroom but it has been postponed at the request of his lawyer.

He's now due to return to court on May 6.

"As we indicated to the judge today, we are going to file another motion asking that he be released," Velasquez's attorney Mark Geragos said.

The 39-year-old is charged with attempted murder after shooting at a man accused of molesting one of his relatives in March.

Velasquez faces 10 counts that could carry more than 20 years of jail time if he is convicted.

"To everyone that has expressed your support, my family and I will never be able to thank you enough. From the bottom of our hearts and the depths of our souls, we are forever grateful for your love. Your selfless gestures and kind words have given me strength in my darkest times. This story is complex and slowly unraveling as we speak. To the true victims of this case, may God give you the strength to come forward. Though it is most difficult to relive the pain that has happened to you, in speaking the truth, justice will be served and your own true healing will start. I will never stop helping or loving my community and all of you. Thank you for loving me."

Velasquez also thanked the community for its continued support.

"I'd probably do the same thing, I'm a father," Velasquez supporter Carlos Ortega said. "I got kids. That comes first before anything."

Another supporter said after the court appearance Tuesday, "It shouldn't be Cain, (Goularte) is the guy that should be in prison."

Goularte was given zero bail while Velasquez was denied bail last month.

One of Velasquez' best friends and former UFC Champion Daniel Cormier was among the crowd supporting the fighter.

He did not want to be on camera, but Cormier told us he is sad for his friend and hopes he can get out.

Legal Analyst and former San Francisco District Attorney and Police Commissioner Jim Hammer says the focus on the molestation case and these sorts of sentiments from friends and family is the best approach for the defense.

"So to the extent he could shift the sympathies so that people might feel, 'well, it's horrible what he did, but god, who wouldn't be upset like that and do something like that?'," Hammer said. That's a super important part of the case, which is not going to happen just in the courtroom, but outside trying to lay the groundwork for a potential jury trial."

Looking ahead, Velasquez will also face a judge in late May to decide the future rights Velasquez has to maintain possession of the gun used in the shooting that left one injured along Monterey Road in the South Bay in March.

"Based on these allegations, I'd be shocked if any judge would allow him to possess a weapon while the charges are pending. Now, if he's acquitted one day, found not guilty, well, he'd have the rights back. But, with the serious, serious allegations, I have no doubt that the judge will grant that motion."

Goularte is set to appear in court Wednesday.

Goularte was arraigned in Santa Clara County Superior Court on Feb. 25. He was released under the conditions that he stay on house arrest in Morgan Hill, stay 100 yards away from any child under 14, and wear an electronic monitoring bracelet. He was on his way to get the monitor when Velasquez attempted to shoot him during an 11-mile high-speed chase, according to authorities.

Goularte's stepfather, 63, was struck once in the driver's seat but is expected to survive.

Goularte's mother operates a home daycare center that Velasquez has been a client of for two years, where the molestation allegedly took place.