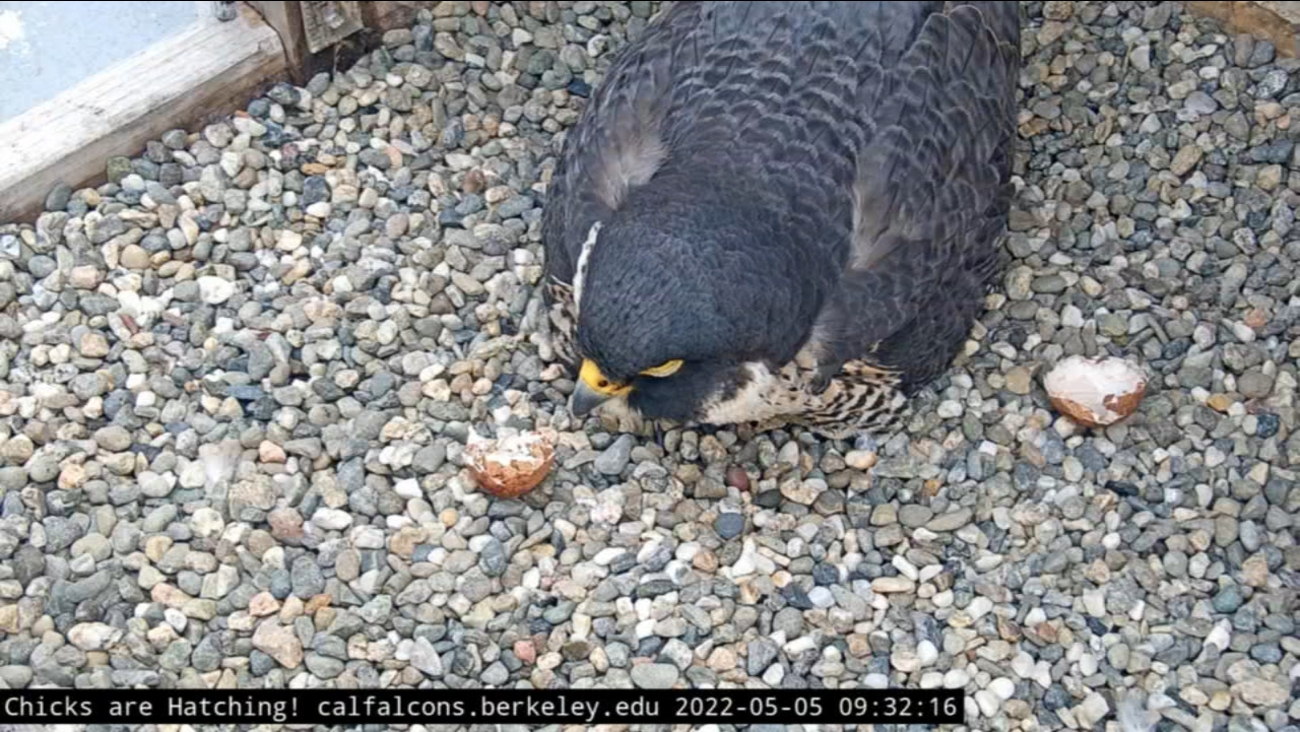 Image of chicks hatching in Berkeley, Calif. on Thursday, May 5, 2022.

The first hatched around 6:14 a.m. Many live stream viewers noticed Annie eating bits of its eggshell. Experts say this is so she can regain some of the calcium she lost.

Pip Pip Hooray! We have our first pip sighting as the chicks are starting to hatch. The pip is the first hole in the egg made by the chick, allowing it to breath outside air for the first time. From pipping to fully hatching takes ~24 hours. pic.twitter.com/KGo4RAdHtC

Her longtime mate, Grinnell, was found deceased in late March. He was apparently hit by a car, according to the Cal Falcon's research team.

They lived together atop U.C. Berkeley's tower since 2016.

Then, you may recall she had a new "bird boyfriend" who swooped in just hours after the death of her of Grinnell.

Then, Annie's new "boyfriend" needed a new name and after public voting, it was narrowed down to nine finalists: Archie, Morgan, Alden, Ed, Lou, Takaki, Calvin, Savio and Ned.

Annie, the peregrine falcon, was spotted with new male falcon at its UC Berkeley tower just one day after the death of her longtime partner, Grinnell.

All of the names had a connection to U.C. Berkeley's history.

Fans voted and Alden was the chosen name.

After 9,478 votes, we are excited to announce the winning name for New Guy: Alden!

Alden Miller, his namesake, (pictured here - sort of - with his collection of birds) was a student of Grinnell and succeeded him as director of the Museum of Vertebrate Zoology. pic.twitter.com/pPzZHu2RZO

While everyone is agonizing over New Guy's new name (vote at: https://t.co/FT43RpXLNg), we thought we'd share a day in the life of Annie and New Guy. At 512x speed. pic.twitter.com/KdINNsdyym

But Annie had other things going in her life. Before Grinnell's death and having "Alden" as a new boyfriend, she went missing for a while back in February before returning to her nest.

Now, her chicks are hatching.

Annie has lived with her mate Grinnell on UC Berkeley's Campanile since 2016. She may have flew to see her young on San Francisco's Alcatraz Island.