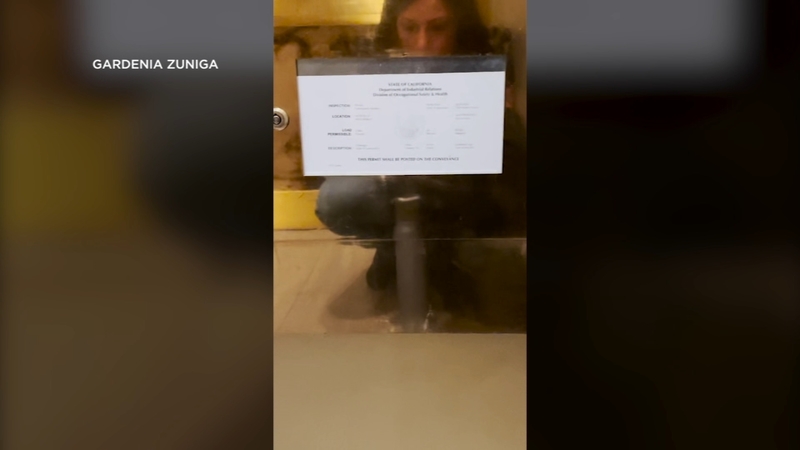 SAN FRANCISCO (KGO) -- Imagine being stuck on an elevator for an hour. It happened to one Bay Area woman who is now asking questions about the state's backlog of elevator inspections.

A convenience for some and for others a necessity, we take elevators every day, but after one Bay Area woman got stuck on one the I-Team reporter Melanie Woodrow uncovered elevators in San Francisco overdue for inspections, sometimes by years.

"I am stuck on the 7th floor, I've called for help, I've already screamed," said Gardenia Zuniga, who documented her recent experience on her cellphone in videos she took while she was stuck.

"It stopped, the lights flickered and that's when it pretty much went downhill for me," said Zuniga.

RELATED: Groom late to wedding after getting stuck in elevator, asks hotel for compensation

Zuniga was visiting her brother who was staying at Hotel Zeppelin in San Francisco when it happened.

Zuniga says she tried using the call button for assistance, but it didn't work.

"Oh great and the elevator is off now," said Zuniga.

"And it's freaking hot," she continued before letting out a long sigh.

"I started hitting the elevator saying 'help, help, I'm stuck, get me out of here, call for help,'" said Zuniga.

She says she called her brother on her cellphone who called the fire department.

A Nebraska man recorded the nightmare-come-true moment of getting stuck in an elevator with rising neck-high floodwaters.

"This is some real (expletive)," said Zuniga.

Zuniga estimates she was trapped for an hour.

"My feet are tingling and I had to take off my shoes," she said.

She tells ABC7 News at times during her rescue the elevator seemed to drop.

In one of the cellphone videos she provided, you can see and hear what she described.

Sitting around, she noticed the elevator's inspection permit, which expired in June of 2020.

"This is 2020 so this could have been prevented," said Zuniga in a cellphone video.

According to the California Department of Industrial Relations' website, an annual state safety inspection allows a safety engineer to review the activity and maintenance of the elevator and to see that safety orders and any required tests are complied with.

Michael Fagan is an elevator consultant.

"The state looks at the various safety devices to make sure that they're operational," said Fagan.

He said it's up to the building's owners or management to apply for a reinspection.

Hotel Zeppelin provided ABC7 News with a 2021 application and acknowledgment from the state letting the hotel know its expired permit would be considered valid until an inspector could be dispatched to complete the inspection.

In an emailed statement to ABC7 News, a Department of Industrial Relations spokesperson wrote, "Elevators are required to be properly serviced and maintained by the building owner and their certified elevator maintenance company, even when operating with expired permits."

"We have a big problem with elevator inspections and it's because we don't have enough inspectors," said California State Senator Scott Wiener.

"In a perfect world we'd have every elevator inspected every year like they are in other parts of the country, but that doesn't take place," said Fagan.

But in the meantime, Zuniga worries.

After Zuniga got stuck, Hotel Zeppelin applied for an inspection again. The hotel's general manager says this time an inspector came out.

Fagan says elevators are predominantly safe and if you're worried about getting stuck, he has some advice.

"Take your lunch, go to the bathroom, keep your cellphone with you, you should be alright," said Fagan.