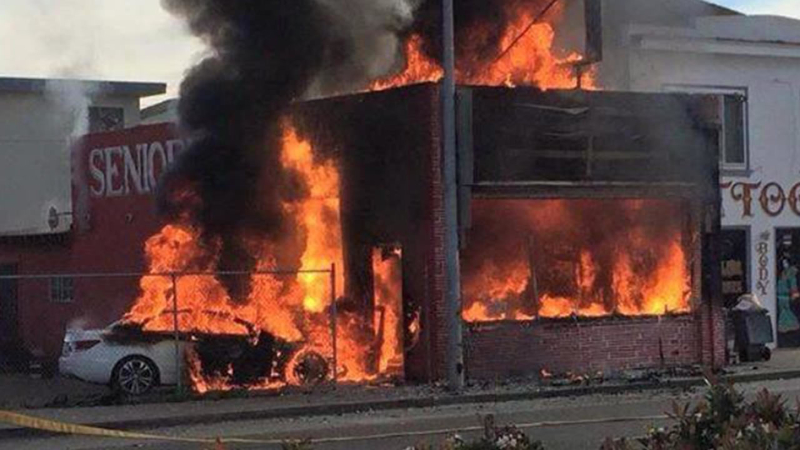 Officials say a 16-year-old girl crashed into the building with her parents' Mercedes convertible after leading police on a chase.

The fire was reported sometime before 10:30 a.m. and was contained shortly after 12 p.m.

One lane of El Camino Real just south of the 280 and 380 interchange is still closed, but traffic is moving smoothly now.

Firefighters are working on trying to stabilize the building.

PG&E crews arrived on scene to address the gas leak caused by the crash.

"I just woke up out of my sleep to run over here and see what we've been working for the last 12 years up in flames," Seniore's Pizza shop owner Mike Jaber said.

Firefighters brought in 18 pieces of equipment, including ladder trucks. They doused the gas line with heavy doses of water, hoping it would stop the inertia.

It helped while PG&E arrived at the scene and dug a 4-foot hole in the sidewalk to clamp the two-inch metal gas pipe.

Firefighters were able to stop the fire from reaching a tattoo shop in the same ground level building. "They had to kick my door in to see if any flames went into the shop," Jays' Fine Line Tattoo shop owner Jason Nieder said.

Firefighters say the white Mercedes-Benz that crashed into the pizza parlor caused the fire.

Officials say the teen was driving the car erratically down a back street and police pursued her through several stop lights.

"It was like if you were in a race track. It was so loud and so fast," witness Joanne Wiggins said.

The driver apparently lost control and plowed into the pizzeria, rupturing the gas line.

The teenager escaped unhurt and was arrested.