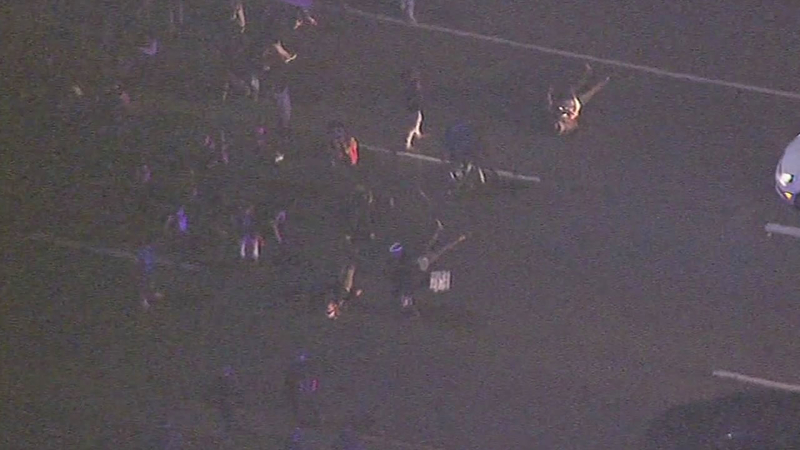 BERKELEY, Calif. (KGO) -- Hundreds of protesters marched through Berkeley and Oakland city streets. They are demonstrating against a New York grand jury's decision not to indict a white police officer in the apparent choke hold death of Eric Garner, an unarmed black man, and other alleged cases of police brutality.

The march was peaceful from Berkeley to Oakland until the protesters made a break and started running for the freeway.

They made it to Martin Luther King Jr. Way and 40th Street where several of them climbed a hill and got onto westbound Highway 24. Traffic came to a halt and the protesters performed a die-in and set off fireworks, but police immediately made arrests. Meanwhile, the rest of the crowd cheered while blocking the intersection of Martin Luther King Jr. Way and 40th. Police threatened to use tear gas and even fired rubber bullets at several protesters who tried to climb back onto the highway.

The demonstration started out peacefully at Berkeley City Hall Tuesday night around 7 p.m. The plan was to complain to city council about the tear gas and rubber bullets used on protesters during this weekend's demonstrations where police claim they were attacked with flying objects. But the meeting was canceled.

Instead, they were met by Councilmember Kris Worthington who sympathized with the protesters and criticized the Berkeley Police Department's tactics.

Now as a precaution, Amtrak suspended service for some eastbound trains running through Jack London Square in Oakland, Emeryville and Berkeley.

The Downtown Berkeley BART station and the MacArthur BART station in Oakland were also temperately shut down.

Amtrak's Capitol Corridor train service headed east to Sacramento at the Oakland Jack London, Emeryville, and Berkeley stations has been suspended for trains headed to Sacramento.

CHP is on the scene and tweeted this photo from Highway 24 and Telegraph in Oakland.

Peaceful protest so far at Hwy 24 and Telegraph. CHP guarding off ramp pic.twitter.com/6pPb4HbpG2

The protest started around 6:20 p.m. when police said about 100 people were marching through the University of California at Berkeley's South Campus area. About an hour later, the group was at Center Street and Martin Luther King Jr. Way, near Civic Center Park, police said.

In an email to Bay Area news organizations Monday afternoon, the protest group behind the demonstrations in Berkeley declared victory for forcing the Berkeley City Council to cancel Tuesday night's meeting.

Demonstrators Monday flooded Interstate 80 and brought traffic to a stop for at least 90 minutes. Police arrested 150 people and many were upset the California Highway Patrol confiscated their belongings, from house keys to backpacks and textbooks. Early Wednesday morning the CHP released detailed information on their Facebook page on how people could retrieve their belongings. 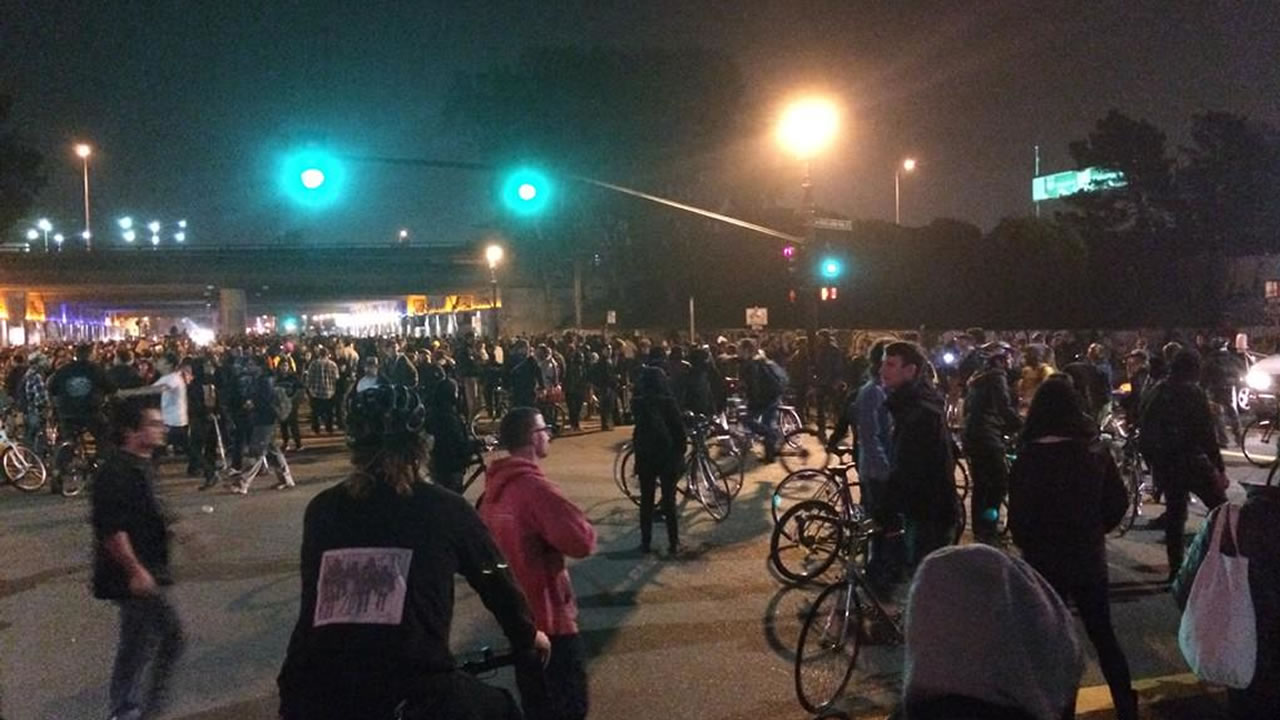 Berkeley city officials canceled their regular council meeting after demonstrator's threatened to shut it down. Berkeley Mayor Tom Bates said they had to cancel Tuesday's city council meeting, but not entirely because of a threat by demonstrators to take it over.

"The Council Chambers can hold about 125 people, and we understand substantially more people are interested in attending the meeting due to recent events in Berkeley," the mayor's office said in a statement. "We want to ensure that the community has as much access as possible to public meetings. The agenda for the December 9 meeting will be rescheduled for a future date and public notice will be given prior to the meeting." 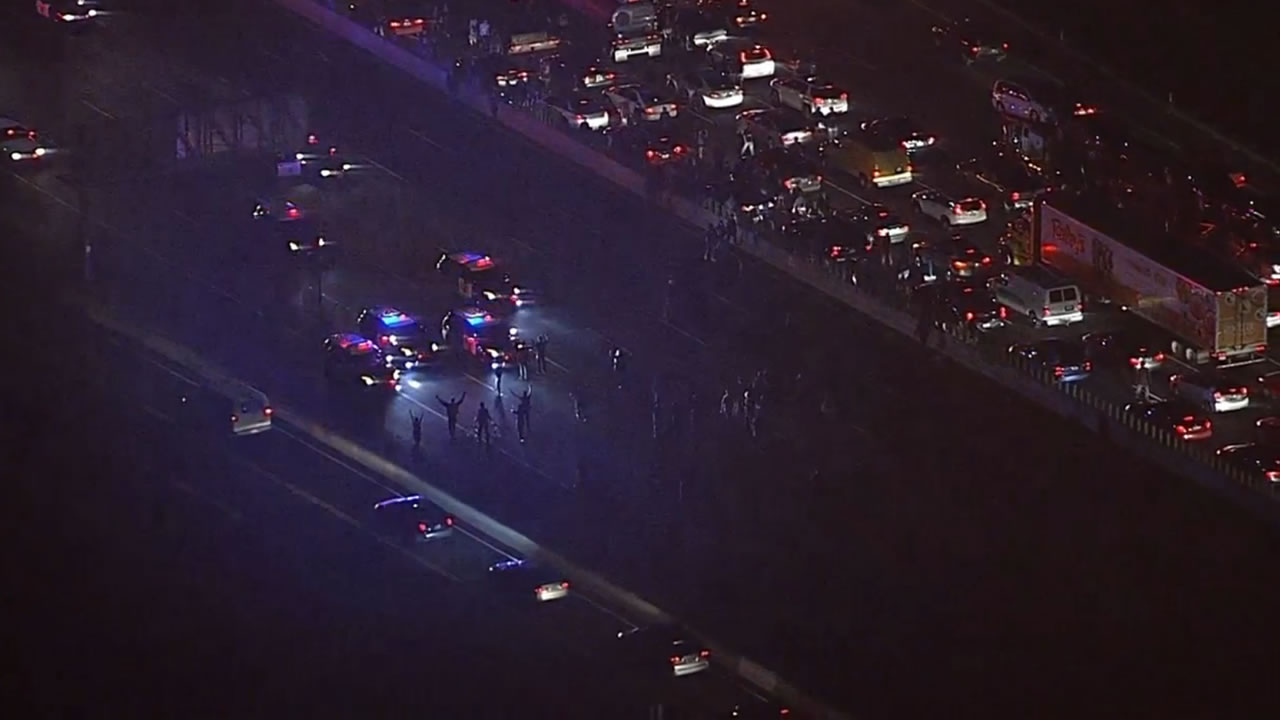 CHP works to keep commuters safe during Bay Area protests
The CHP has extra patrols out to keep drivers in the Bay Area safe after protesters took their message off the streets and onto the freeways.

The protests were the latest in a series over the police shooting death of 18-year-old Michael Brown in Ferguson, Missouri, and the death of Eric Garner, 43, by a New York police officer's choke hold.

While demonstrations in Oakland last week had been largely peaceful, protests in Berkeley Saturday quickly led to police tear-gassing protesters, who vandalized various businesses and hurled rocks and bottles at police officers.

Sunday night's protests saw more vandalism before protesters marched to Oakland and blocked a freeway, where they were tear-gassed by the California Highway Patrol and eight were arrested.

The crowd on Monday night was much bigger than previous protests -- up to 1,500 people took part, but also the most peaceful. They crowded into city streets and blocked traffic. A few even managed to get onto I-80 and block freeway traffic. The result was a massive backup on one of the Bay Area's busiest arteries. Police chased the demonstrators off the interstate, only to have them push their way back on. 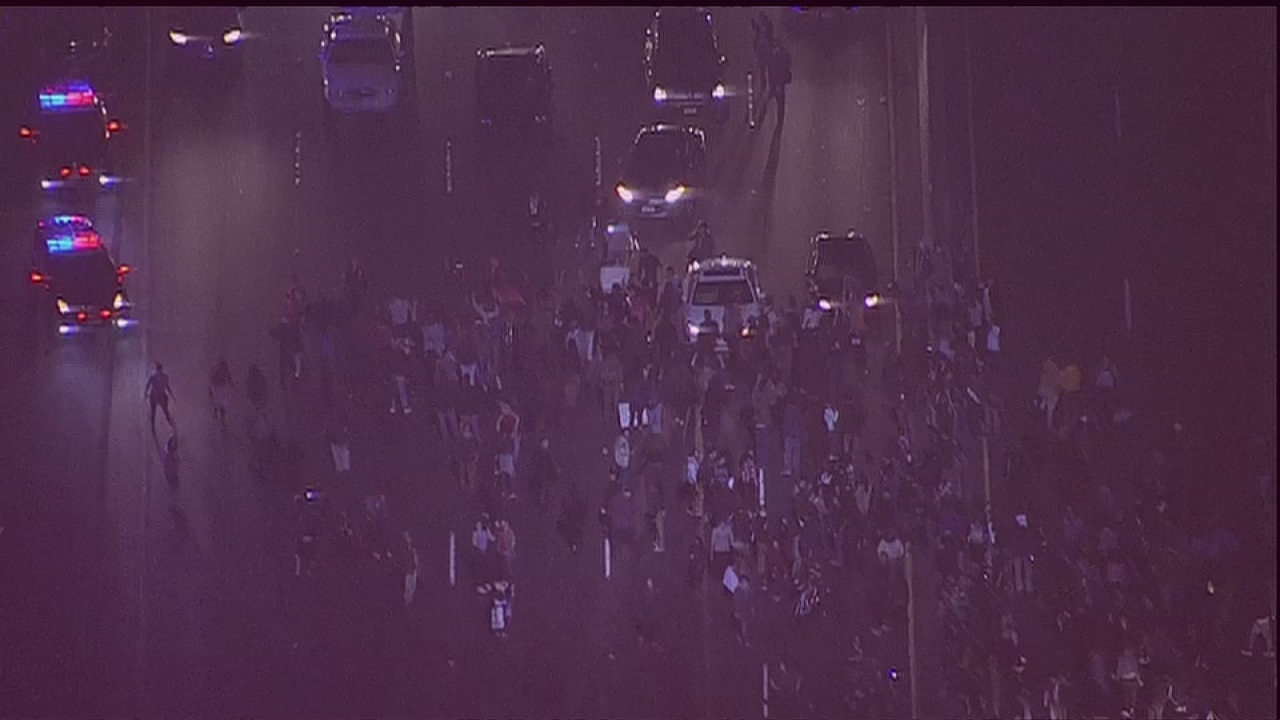 RAW VIDEO: Protesters in Berkeley shut down I-80
Monday evening a couple hundred protesters walked onto I-80 and blocked traffic in both directions.

One woman went into labor while stuck in the backup. Dispatchers sent a fire truck and ambulance to meet her car and take her to Alta Bates Hospital. The woman, 29-year-old Adriana Torres, gave birth to a healthy baby girl.

Woman goes into labor on I-80 in Berkeley.

Other demonstrators blocked the tracks, stopping Amtrak trains. There were 150 people who were arrested in total. But, unlike Sunday night when people in the crowd shattered windows and caused other damage, Monday night's protest was peaceful.

A faction of protesters also wants Police Chief Michael Meehan to step down.

There is one message that the protesters and city officials can agree was a welcome change -- no shattered windows, or Molotov cocktails, no one seeking hospital treatment for injuries.

During a visit to see students at the Zapata Street Academy high school in Oakland, Rev. Jesse Jackson Tuesday reflected on the form the demonstrations have taken in the Bay Area since the grand jury decisions in both Ferguson and New York City.

"Most of the people at these demonstrations have been nonviolent, but some cover their faces and they engage in these acts, but I would certainly hope the actions here in the Bay would remain massive, disciplined, focused and nonviolent," Rev. Jackson said.

Sophomore Alysia Oliver says she's extremely concerned about the issues too, but doesn't always like the methods used by some demonstrators.

"I know you guys are trying to protest, but stop us from getting away from what we need to do, when we're really the voices that you need to hear," she said.

The Berkeley police chief is concerned about a tweet by the group Anonymous showing an officer during one of the recent protests. The group accuses him of beating an elderly man during a protest Saturday night. The police chief says he considers it a threat and will try to provide the officer with extra security.

In Union City, SKY7 HD showed James Logan High School students leaving class as part of a protest Tuesday afternoon. They marched to police headquarters, located across the street from the school, and staged a die-in.

Teachers will decide if the students who left class can make up any work they missed.

African-American leaders have a message for the Berkeley protesters: stop the violence and join the fight for racial justice.

A group of ministers gathered in San Francisco to denounce the looting and blocking of freeways that has taken place the last few days.

Dr. Amos Brown, who learned civil disobedience from Martin Luther King Junior said the protesters should look back to the civil rights demonstrations from the 1960s.

"We met, not just to raise hell, or to make things uncomfortable for others," Brown said. "But we wanted to win over our brothers and sisters."

The group is asking the demonstrators to join the black community in its fight for racial justice.