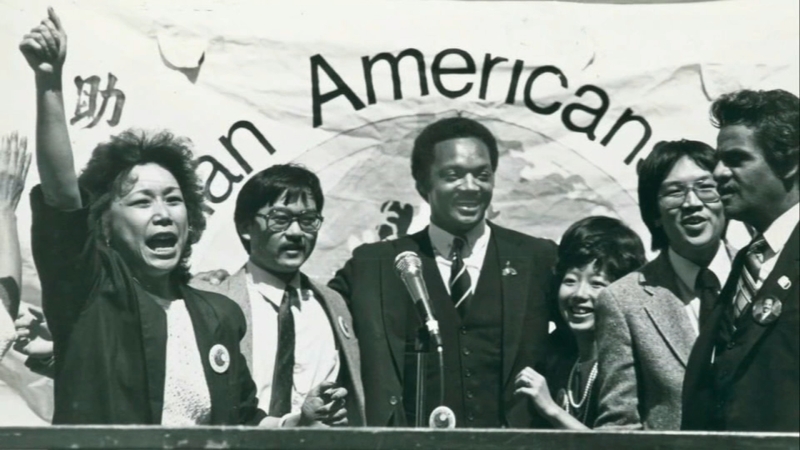 SAN FRANCISCO (KGO) -- Jesse Jackson once said, "Never look down on anybody unless you help them up."

The civil rights leader was in San Francisco's Chinatown neighborhood on Wednesday to show his support for the Asian American Pacific Islander (AAPI) Community.

Reverend Jackson is commonly referred to as the great unifier. Today, once again bringing together two communities which he describes as being under attack.

Nearly 40 years ago, he came to Chinatown after a Chinese American named Vincent Chin of Detroit, Michigan was beaten to death by two men for being Asian.

"At a time when we've all been going through the attacks of racism and prejudice, Reverend Jackson again brings us together," said Pastor Joseph Bryant of the Rainbow PUSH Silicon Valley/Bay Area.

In 2014, Reverend Jackson was fighting for more diversity at Silicon Valley companies. He has long-been a champion of equal justice.

"In this time of anti-Asian hate, the power that you bring, joining us, I'm so thankful," expressed activist Norma Fong.

Despite being diagnosed with Parkinson's Disease, he is re-engaged in a movement following the recent attacks against the AAPI community.

"We're at a cross roads in America, shall we go forward in hope or backwards in fear, ignorance?" said Jackson.

"We have a counter narrative and a new narrative of hope, that we are in this together," added Teng.

Many people with Parkinson's Disease would have perhaps chosen to stay away from the limelight, but not Reverend Jackson.

Today he proved that he's not yet ready to give up the struggle to be heard.

Find resources for the AAPI community on our Take Action page here.