Despite lawmakers delivering remarks urging both parties to unify, several Republicans, including seven in California, voted against accepting election results in Arizona and Pennsylvania.
KGO 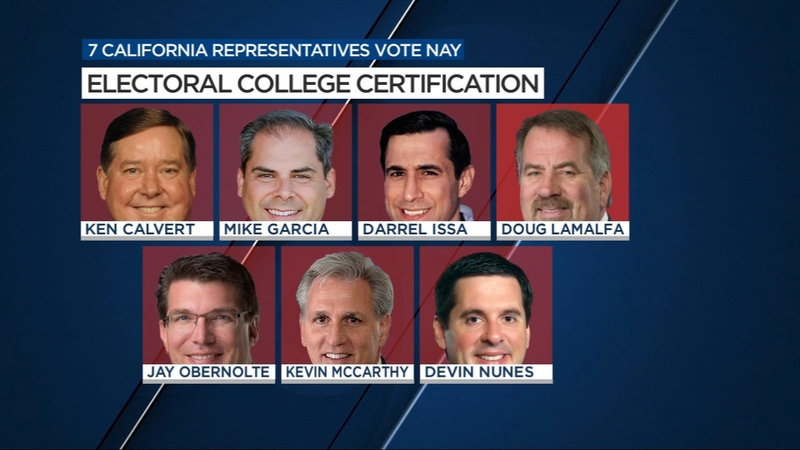 But despite many lawmakers taking to social media denouncing the violence of the rioters and later delivering remarks on the congressional floor urging both Republicans and Democrats to unify during a dark hour in our nation's history, several Republicans, including seven from California, voted against accepting election results in Arizona and Pennsylvania.

"This side of the aisle always believes in working with anyone who wants to move it forward. That does not mean we're going to agree 100% of the time, that does not mean our voice cannot be heard," House Minority Leader Rep. Kevin McCarthy (R-Bakersfield) said during the joint session.

Only two Republicans from California voted with the majority to accept the results, Rep. Young Kim (R-Fullerton) and Rep. Tom McClintock (R-Elk Grove).

Representative-elect David Valadao (R-Hanford) and Michelle Steel (R-Seal Beach) both missed the vote due to testing positive for COVID-19.

Valadao wrote on Twitter that if he had been present for the vote, he would have also gone with the majority to confirm Biden as the new president.

"Choosing to ignore the facts for the sake of party power is damaging to the American people's confidence in the Electoral College and sets an unwise precedent for future elections," Valadao added.

ABC News Chief White House Correspondent Johnathan Karl reports President Trump is largely alone inside the White House with close advisers avoiding him after the chaos at the U.S. Capitol.